From Rainier Beach to Northgate, we have big plans – and great momentum – to connect Seattle by bike by 2021.

Imagine being able to ride your bike through Seattle on a connected network of trails and protected bike lanes spanning the city from north to south and east to west, linking neighborhoods from Rainier Beach to Northgate, Georgetown to South Park and into the heart of downtown. That vision can soon be reality.

Cascade’s Connect Seattle campaign, once realized, will enable more people of all ages, backgrounds, and abilities to travel by bike—improving community health, reducing carbon emissions, and getting people where they need to go.

Connect Seattle highlights 14 routes, across the city which, once complete, will create a Seattle connected by bike – filling gaps in the existing bike network and connecting people to the places they want and need to go. Almost all of these 14 routes are in the works, others are  under construction and on the ground in 2020.

Below, explore the map, and read on for highlights of connections advancing this year.

4th Ave: This section of protected bike lane is an important addition to Seattle’s downtown Basic Bike Network. Construction is to begin this year on the first phase between Pine and Spring streets, linking Westlake Park and the Seattle Public Library. 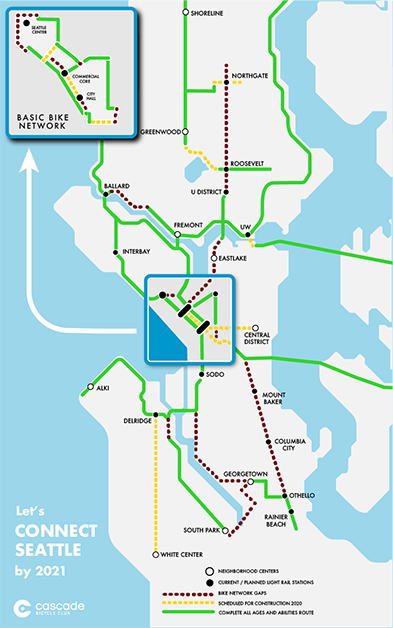 12th Avenue South: Passing through the International District, this section of protected bike lane running north and south will link the I-90/Mountains to Sound Greenway to the King Street Neighborhood Greenway and the downtown Basic Bike Network.

And 2021 will bring more progress, including the expected completion of the Northgate bike and pedestrian bridge over Interstate 5 to connect the new light rail station to surrounding neighborhoods divided by the highway.