It’s safe to say that biking is an integral part of Kirkland resident Faith DeBolt’s life. Like a growing number of others who have journeyed to the Puget Sound region in recent years, Faith moved here without a car, requiring her to find a new and more efficient way to get around.

She began bike commuting in Seattle in 2007 via the Burke-Gilman Trail, first to her job at the University of Washington and later to a different job in Bellevue. But when she moved to Kirkland in 2011, Faith needed a manageable route for reaching her Bellevue office, nestled near the busy I-405 and SR 520 interchange. She began using the Cross Kirkland Corridor shortly after it opened in 2015. The Cross Kirkland Corridor is a 5.75 mile stretch of gravel trail that comprises a portion of the larger Eastrail (formerly known as the Eastside Rail Corridor). “I like it because it’s flat, safe to be away from the cars, and peaceful,” she said of her daily trail commute.

Faith was in good company at her Bellevue office, which boasted a growing bicycling culture and many colleagues who also commuted via Eastside trails and bikeways. When the opportunity to participate in Cascade’s annual Bike Everywhere Month programming arose one year, Faith jumped on the chance to help inspire others to try bicycle commuting. The positive effects were lasting, as Faith reports that between a quarter and a third of the company’s Bellevue employees now bike to work.

It was that experience that inspired Faith to get more involved in Cascade’s advocacy work. Faith’s passion for bicycle advocacy is the means by which she hopes to eventually help institute more bicycle-friendly improvements to the regional trail system. One of her current interests is adding more official access points to the northern portion of the Eastrail so that more people on bikes can safely access the trail from multiple locations—and she’s even initiated conversations with King County staff about how to do so.

Engaging public officials in important dialogue is just one of the skills Faith developed during her 2015 participation in Cascade’s Advocacy Leadership Institute (ALI), a program that helps bike advocates engage in community projects and work with local policy leaders to make bicycling more accessible. As a result of her ALI training, Faith worked with Cascade to develop a campaign to start a bike to school program at her daughter’s elementary school in north Kirkland. On Bike to School Day in 2017, they collectively “overflowed the bike racks and had to send families home with their children’s bikes,” said Faith.

All that is just one sliver of her community-based bicycle advocacy. The following year, Faith coordinated with the school, the City of Kirkland, and the King County SchoolPool pilot program to encourage families to walk, bike, and carpool to school. She was also appointed to the Kirkland Transportation Commission that year as a voice for non-single-occupancy-vehicle transportation.

Through her advocacy work it’s easy to see that Safe Routes to School programming and education of young bike riders is a source of inspiration. “Last year was my daughter's last in elementary school, and we once again worked with the school, Cascade, and the King County SchoolPool to have a big turnout on Bike to School Day,” she said. “I definitely noticed over those three years an increasing number of bikes in the bike racks—from rarely one to two bikes, to full racks on sunny days throughout the year.” She summed up, “If I do nothing else in my life, I will rest on that accomplishment!” 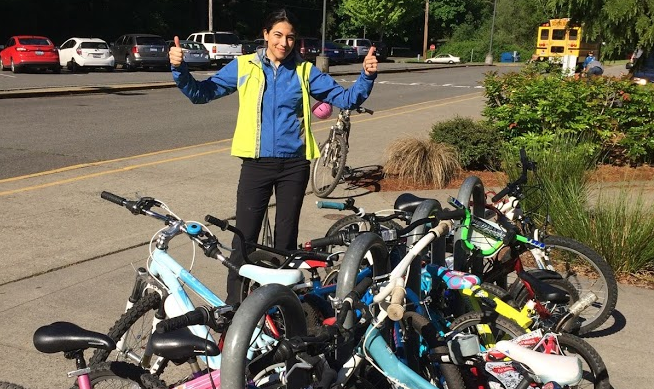 More recently, Faith participated in a 2018 Cascade workshop designed around getting more women on bikes. She was inspired by that experience to plan a Mother’s Day bike ride in Kirkland, which was attended by 17 riders, including State Representative Shelley Kloba. Faith has also been spotted on Cascade policy rides focused on Bellevue, Kirkland and the Eastrail expansion. In the last two years, she has become involved with Kirkland Greenways, helping to re-establish regular meetings and positively influence the next update to the Kirkland Active Transportation Plan.

But her participation in Cascade programming doesn’t stop with advocacy work. Last year Faith rode alongside her husband and daughter in the E-bike World Record Ride Powered by Rad Power Bikes.

Cascade’s East King County Policy Manager Claire Martini said advocates like Faith are invaluable to Cascade’s work. “People like Faith show the power of caring neighbors to improve their community,” she said. “To ensure people of all ages, abilities, and backgrounds can get around safely and comfortably by bike, it takes a willingness for people to roll up their sleeves and lead the charge within their own workplace, schools, and community, just as Faith did.”

When it comes to organizing, passion is everything. Dedicated community members like Faith are helping to see some important Eastside projects through to the next level. And with funding in hand to grow the trails system thanks to the supermajority of King County voters who approved Prop 1, now is the time to advance key projects like the Eastrail and other local connectors to seamlessly connect communities by bike.

To learn more about Cascade’s Eastside trail advocacy and how you can make a difference in your community, sign up now.