This month, city transportation leaders are taking comments on the 2019-2024 Bike Master Plan Implementation Plan. Together we can underscore that key investments in a handful of projects can get us most of the way to a cross-city network. Say you’ll join us.

It’s often hard to connect the dots between a city plan to the day-to-day reality of our lives, and the 2019-2024 Bike Master Plan Implementation Plan (BMP IP) is no exception. But here's the truth: what's in this plan will determine whether we can get to the places we want to go by bike – both within and between neighborhoods –six years from now.

The plan is a decision point between incrementalism and acting with urgency.

Do we invest in a few key, and – let’s be real – challenging projects between now and 2024, to create meaningful connectivity around new light rail stations and along key corridors where people already bike in high numbers, despite dangerous conditions? We say yes. Add your voice at an upcoming open house.

Another decision: should half the city remain disconnected by bike from nearby neighborhoods, downtown and the rest of the city, and without meaningful places to safely and comfortably travel by bike. We say no. We need to fund – as one of the highest priorities – a South East Seattle connection on Beacon Ave S. Stand with us this month.

Don’t get us wrong; it’s not all bad. This draft plan gets some of the bike network right – like completing the Burke Gilman Missing Link, advancing almost all of the Basic Bike Network on an accelerated timeline (read that again!!), keeping on track a handful of important projects across the city – from Eastlake, to East Marginal Way, to Delridge. But we need to go further. And if the city is willing to seek grant funding – a promise to voters that underpinned the goals of the Move Seattle Levy – we absolutely can go farther towards a city where biking is a viable option for all – not just the bravest of souls. Adding a handful of projects will connect Seattle by bike.

Our Chance to Connect Seattle

Last year Cascade launched Connect Seattle, a vision to build a cross-city basic network of bikeways, and thus increase the numbers of types of people biking, by closing network gaps and creating safe places to bike along the city’s most treacherous routes. Many Connect Seattle projects are already in the draft BMP IP – especially downtown and to the north. Now is the time to commit to building the remaining Connect Seattle routes and ensure a Seattle, connected by bike, is a reality.

ADD YOUR VOICE THIS MONTH

Attend an open houses this April (central, south, west and north Seattle dates and locations) to show the city that people want to be able to get around safely by bike. Tell city leaders: Connect Seattle by bike with this plan. Here’s how:

Here's a more detailed run down of the good projects (green); places for improvement (yellow); and glaring holes (red). 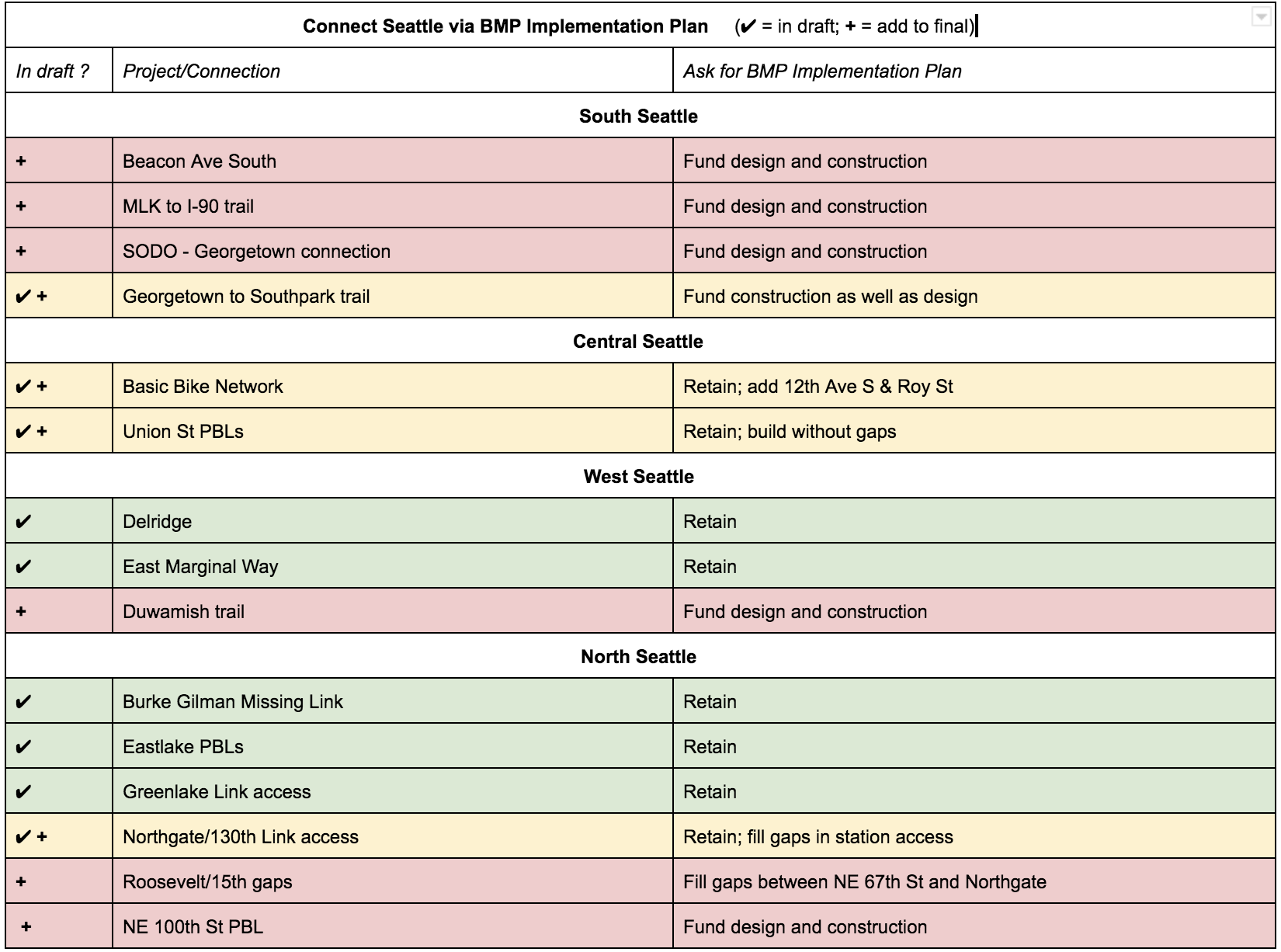