A Major Milestone for the Basic Bike Network

With your support, a concrete commitment to build much of the Basic Bike Network by 2019 is within reach.

In 2016 Cascade and Seattle Greenways launched a campaign with an ambitious goal: to build a Basic Bike Network by 2019. This vision cemented years of advocacy by many hundreds of safety advocates, community transportation leaders, and people who bike – or want to.

It’s been a bumpy road, with ups like the 2nd Avenue Complete Streets project and the quick-build section of Pike/Pine, and downs like the devastating delay to the 4th Ave two-way protected bike lane, announced just a couple months ago.

That delay of the 4th Avenue protected bike lanes created a big question for the fate of the Basic Bike Network and it spurred us to action because people need safe and comfortable ways to get around downtown by bike.

Stand up in support of the Basic Bike Network this July

The legislation takes a concrete step towards building a connected network of all ages and ability infrastructure that will make biking to and through downtown Seattle safer, and more accessible to people from 8 to 80, and of varying skill and comfort levels.

This July 18 at 12 noon, we need you, your friends and your co-workers to join us to pack the City Council Chambers. Together we can demonstrate what many of us who ride on our downtown streets every day know:

On Wednesday, July 18 the Seattle City Council’s Transportation and Sustainability Committee will hold a special lunchtime meeting to review and vote on a policy that will lay out when the city will build much of the Basic Bike Network – including the long awaited connections between the 2nd Ave spine, and surrounding neighborhoods:

Taken together they will form a continuous spine of protected bikeways connecting from south to north. Via this legislation the city is committing to building all three of these essential connections by the end of 2019. 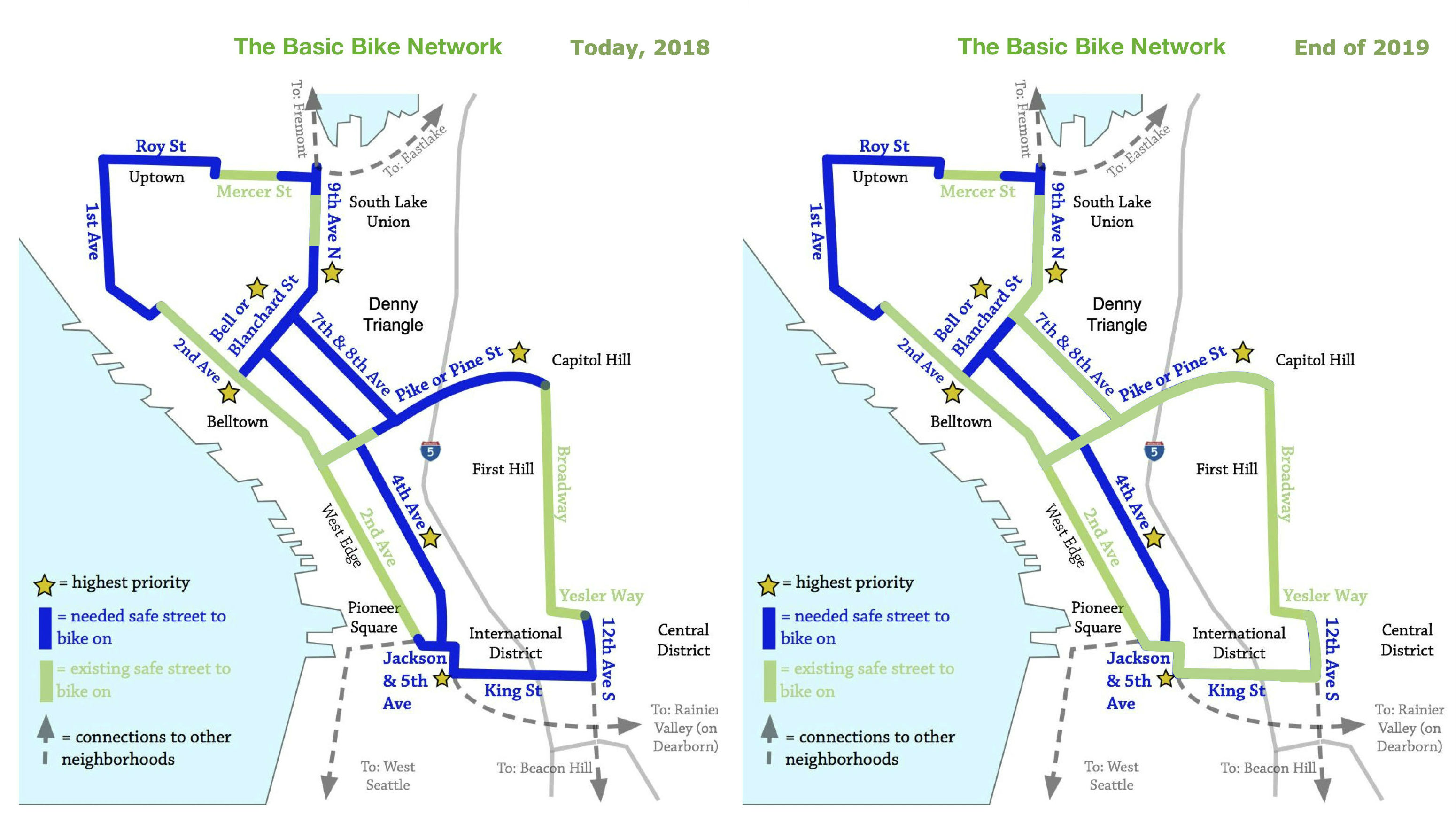 Above: With this city commitment, and follow through, a robust bike network will take shape.

This is a huge milestone, and an important moment to underscore – yet again – that #wecantwait for the Basic Bike Network. We need to send a resounding message to council to encourage a unanimous yes vote. Council must hold SDOT accountable to build a safe, connected downtown network by 2019.

Connections to Downtown are Key

Investments in 7th and 2nd avenues have transformed those busy commercial streets into some of the most pleasant places to be downtown – whether you’re on a bike or not. Why? Because the improvements included additional investments, including sidewalk upgrades, new lighting, and extensive investments for transit and motor vehicles.

But the two bikeways, along with the cost-effective short segment on Pike/Pine that city crews quickly delivered in late 2017, remain islands in an increasingly complex urban street environment. The result? Numbers of people biking downtown are increasing, but not at the rate our sister cities, like Vancouver BC, experienced when they prioritized building a connected network.

Prioritizing connections between the existing downtown network to surrounding routes to the south, north and east, will help the city realize the shangri-la...meaningful mode-shift towards biking – at a time when we need it most... when car congestion is at its worst.

Your Advocacy Paying Off

The delay of the 4th Avenue two-way protected bike lane early this Spring felt like a huge broken promise to the many, many people who’ve been advocating for a Basic Bike Network for years. The delay called into question the fate of the downtown network, and what the city was willing to deliver to get people safely to the places they’re going, by bike, downtown. 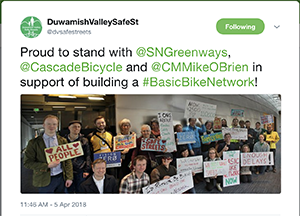 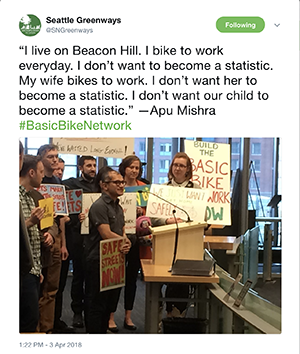 Above: This Spring, advocates turned to council to share disappointment, and worry for community safety, around delays to the Basic Bike Network. This upcoming Council action gets the bike network back on track.

aileen jhon
Wed. Nov 21, 2018 12:27am
I admire this article for the well-researched content and excellent wording. I got so involved in this material that I couldn’t stop reading. I am impressed with your work and skill. Thank you so much. <a title="Forskolin-Italy.com" href="https://www.forskolin-italy.com/">Forskolin-Italy.com</a>

aileen jhon
Wed. Nov 21, 2018 12:27am
I admire this article for the well-researched content and excellent wording. I got so involved in this material that I couldn’t stop reading. I am impressed with your work and skill. Thank you so much. [url=https://www.forskolin-italy.com/]Forskolin-Italy.com[/url]

aileen jhon
Wed. Nov 21, 2018 12:28am
I admire this article for the well-researched content and excellent wording. I got so involved in this material that I couldn’t stop reading. I am impressed with your work and skill. Thank you so much. Forskolin-Italy.com