Five miles of the Eastside Rail Corridor (ERC) are freshly gravelled and ready for you to explore – demonstrating progress towards the vision of a connected trail between Kirkland and Renton, via Bellevue, by 2020. Let’s thank King County for the new trail connections, and tell them we’re looking forward to more.

Getting from Kirkland to Bellevue by bike just got a whole lot easier and appealing. That’s because King County crews just completed rail removal and gravel trail building in a mile of the ERC from the South Kirkland Park and Ride to Bellevue’s Northup Way. It’s a short but mighty segment of trail, and to date it’s the first inter-city connection on the 28-mile Eastside Rail Corridor that will one day connect Woodinville, Kirkland, Redmond, Bellevue, and Renton. 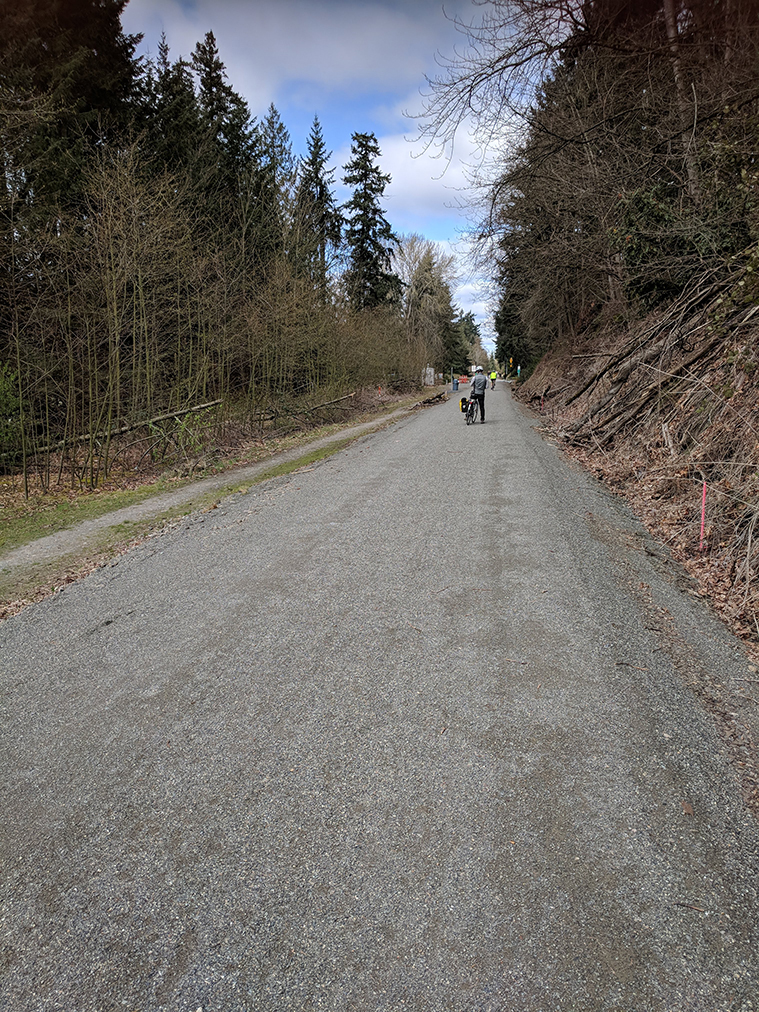 Between Kirkland and Bellevue: It’s not the trail; it’s where you go on it!

It’s also the first segment of the ERC owned by King County (Kirkland and Redmond own, and have opened trail within their respective cities) that’s been converted to usable trail. For Cascade and many other community voices who’ve been advocating development of the trail, it’s a big milestone - but it’s also just the beginning. Take a second now to thank King County for breaking ground on the ERC. Tell them you’re excited to walk, ride, and enjoy more of the 17 miles of trail King County owns.

It’s important to ensure King County leaders know that the community supports – and is waiting to use – more of the Eastside Rail Corridor trail.

A Window to the Future ERC

Much of the new mile of ERC trail from Kirkland to Bellevue cuts through quiet wooded areas or backs onto industrial properties. That’s except where the trail crosses under I-405, Northup Way and SR-520 in quick succession and gloriously insulated from the traffic above. South of these crossings, the trail transitions into part of the ERC right of way owned by Sound Transit. Also recently constructed, and opening for public use in May, is a gravel trail between Northup Way and Bellevue’s Spring District. The trail terminates in the Spring District at the new (but not terribly appealing, unless you want to ride right next to multiple lanes of traffic) 120th Ave NE bike lanes. 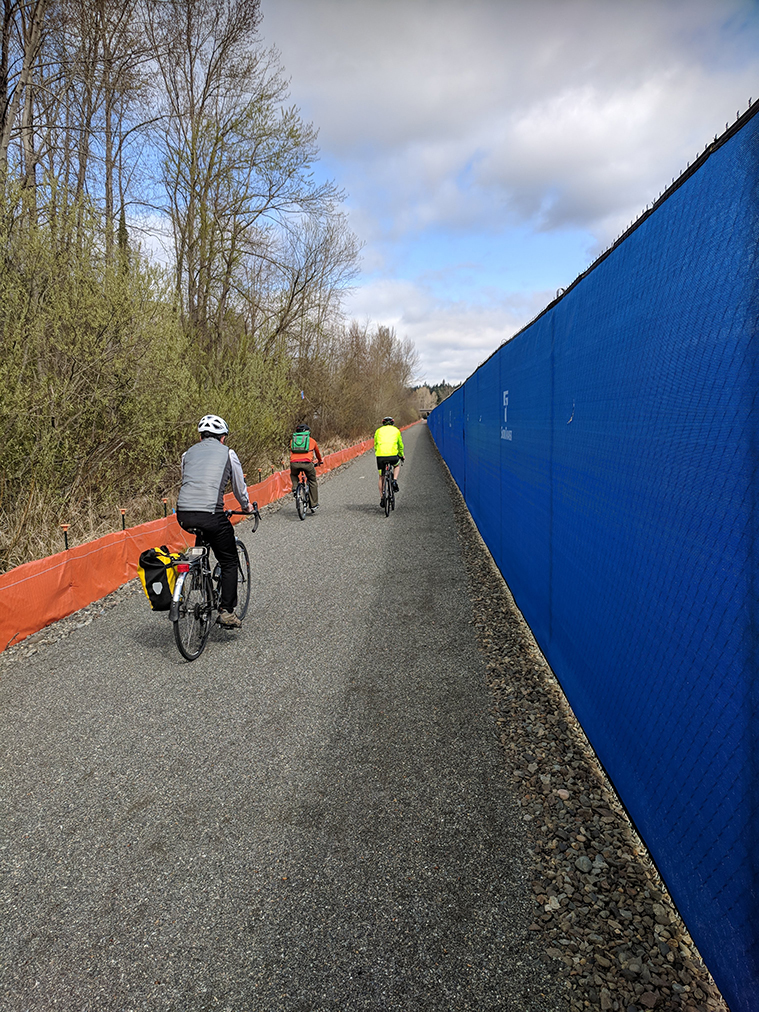 By 2023, to the right will be Sound Transit’s Maintenance Facility, and this trail will be a paved part of the full ERC. For now it’s a handy connection between Northup Way and Bellevue’s Spring District.

This is Bellevue’s first true connection into the King County Regional Trail Network, and it’s just the beginning: by 2020 the Eastside Rail Corridor will extend from Bellevue’s NE 4th St., south across the newly retrofitted Wilburton Trestle, over the planned new Wilburton Gap land-bridge, and south across the I-90 trestle, continuing all the way to Gene Coulon Park in Renton.

For the next few years an on-road detour off the ERC right of way between Northup Way and NE 4th St. (bike lanes and a shared use path on 120th Ave NE are the official detour route) will be in place. That's until Sound Transit’s Eastlink construction is complete – possibly as soon as 2022, and 2023 at the latest.

The Bellevue section of the ERC has been the focus of much of Cascade’s advocacy efforts over the last several years precisely because it is the lynchpin between the already popular Cross Kirkland Corridor (Kirkland's six miles of ERC trail), and Renton. Fully funding a retrofit of the Wilburton Trestle and closing the “Wilburton Gap” (where a railroad crossing for the I-405 highway was demolished in a road widening project some years ago) have been the most significant funding challenges in recent years. For example, retrofitting the Wilburton Trestle is estimated to cost $13.2M.

Lacking a plan (or more precisely, the funding) to close those two gaps slowed the impetus to build other, lower cost, trail segments. Rightly so: the trails impact would be significantly diminished without the Wilburton Trestle or I-405 crossings complete.

Things changed in late 2016, when after a significant push by Cascade and community and nonprofit partners highlighting the need to fund the Wilburton Trestle retrofit, government and private funding partners announced a plan to fund the Trestle retrofit by 2020. This gave WSDOT, who is committed to funding a new crossing over I-405, the certainty they needed to commit to building the Wilburton Gap land bridge during 2019, rather than 2024, as originally scheduled.

With the Wilburton Gap bridge fully funded, and $8M secured for the Wilburton Trestle. Things are looking hopeful – especially with opportunities to secure more state, local and parks levy funding on the horizon over the next year or two. But, as King County budget discussions ramp up, now is an opportune time to remind King County officials just how much love there is for the Eastside Rail Corridor – thank King County now.

A New Trail Connection in Renton

Progress was also made this winter to complete four miles of the ERC trail in Renton. Next time you’re riding the south-east section of the Lake Washington Loop, glance between Lake Washington Boulevard and Lake Washington and you’ll see that the old railroad bed is now home to a packed gravel trail between Gene Coulon and Newcastle Beach parks. While it’s not going to supplant the on-road route for road riders, or people riding to burn calories, the four miles of trail is already being used and embraced by the community. The interim gravel trail completes the southern four miles of the trail, and builds more of the regional trail that will connect Kirkland to Renton, via Bellevue, by 2020!

Have you walked or ridden the new trail in Bellevue or Renton? Let King County know that the trail matters to you!