Together we can send a message that a downtown demonstration bikeway is the next step towards a Bellevue Bike Network! | Cascade Bicycle Club
Skip to main content

Together we can send a message that a downtown demonstration bikeway is the next step towards a Bellevue Bike Network!

The city’s proposal to build a downtown demonstration bikeway by May 2018 represents a solid step towards making it safe and comfortable to ride in Bellevue. Your support during November’s outreach period is essential to help make a network of protected bike lanes in downtown Bellevue by 2020 happen.

It’s bold idea: create a “demonstration” bike lane through downtown Bellevue. Open it for bike month 2018; test, iterate and perfect it. It’s how cities like Calgary and Edmonton rapidly increased the number of people biking, and the number of safe miles of bikeways to bike on.

This winter, City of Bellevue staff are responding to increasing demand by residents, employees and businesses for safe places to bike by proposing the demonstration concept here.

Thanks to 2016’s voter-approved levy, dedicated funds are ready to build the pilot, but here’s a reality check: improving streets for people of all ages to ride a bicycle - something that’s never been done before in Bellevue - is going to be a big lift.

That’s why caring neighbors and people in businesses need to bring our voices together to say “we want safe places to bike in Bellevue; the demonstration bike lane is the best place to start."

This new city survey is the perfect chance to do just that.

The proposed demonstration bike lane on 108th i(one of four corridors being looked at, and twhat Cascade sees as the best option) includes segments of buffered, protected and striped bike lanes. The visual above shows how 108th at 6th street (by the transit center) could be reconfigured to work for bikes, transit and cars.

The Bike Network Vision in Bellevue

City staff is looking for people to weigh in on which downtown corridor makes most sense to test a demonstration bike lane in 2018, (we prefer 108th, because of the connectivity between the Bellevue transit center, downtown destinations, and the SR-520 and I-90 trails).

The demonstration bike lane is a big opportunity to make headway towards Cascade’s vision of a safe, connected and protected basic bike network to and through downtown Bellevue by 2020. With the SR-520 Trail opening by the end of the year, connecting Seattle and Bellevue by bike, and the Eastside Rail Corridor from Kirkland to Bellevue opening early 2018, Bellevue is firmly at the crossroads of the west/east Lake Washington, and north/south Eastside spine. 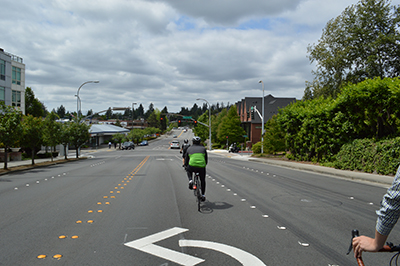 Biking in downtown Bellevue today requires cycling on multi-lane roads and mixing with fast moving traffic – which is why not many people ride downtown.

What’s a “Pilot” Bike Lane? Why a Pilot?

Demonstration bike lanes are are affordable and flexible. Cities can get them on the ground quickly because they use materials that are temporary, and can reduce onerous upfront planning because they allow for changes and modifications. Seattle’s Second Avenue protected bike lane is an excellent local example; it’s been improved over time and is now the backbone of Seattle’s budding downtown bike network. For Bellevue, the demonstration model offers the chance to build the city’s first protected bike lane, and to create the first all ages and abilities bikeway through downtown Bellevue. This is also a chance to demonstrate how many more people will bike in Bellevue if there are safe, comfortable places to do so.

This month, there’s ample opportunities to voice support and get engaged. Encourage your friends, neighbors and co-workers to speak up too; there’s strength in numbers.

The city of Bellevue just launched this community survey asking about people’s experience traveling to and through downtown Bellevue, and thoughts on the four candidate downtown demonstration bikeway corridors (again, we prefer 108th). 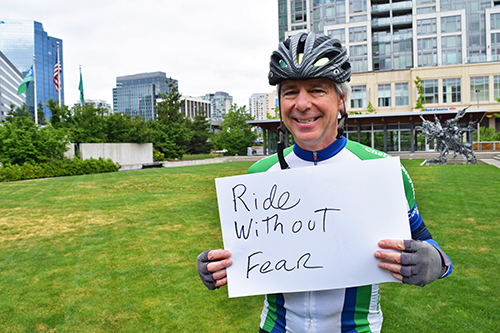 Stand Up (In your Bellevue Bike Network T-shirt*) To Show Support of the demonstration bikeway:

Daytime and evening events this month mean that whether you work, or live in Bellevue  – or both, you can attend and speak up in support of the demonstration bikeway.

The exact location is 106th Ave.NE & NE Sixth St. downtown. Bring your coworkers and make it a group activity!

Bring friends, family and neighbors, so more voices weigh in!

*We’ll have t-shirts at the open house!

What’s Next After the Outreach?

It’s down to city council to approve the demonstration bikeway concept, and they’ll vote in January. Council will receive a recommendation on whether to proceed from the Bellevue Transportation Commission, also in January. If Bellevue residents, employees and visitors overwhelmingly support the bike lane, it’s hard to see how the Council or the Commission wouldn’t move forward. Without vocal support, it’s hard to say what the outcome would be. But let’s not find out: let’s all speak up during November in support of the downtown Bellevue demonstration bikeway.

Together we can build the Bellevue bike network!

Excited by the prospect of safe places to bike in Bellevue and want to do more to help? We’re getting local advocates together to strategize and take action. Sign up if you’re game to get involved.

Think your employer might be interested in formally voicing support of safe places to bike? Reach out for tools and ideas to make this happen! Vickyc@cascade.org

Speak Up for Safer Bicycling in the Seattle Transportation Plan