Take Bellevue’s bike share survey and get engaged help build momentum for a downtown Bellevue bike network. Help ensure safe and attractive places for all types of people – including those using bikeshare!

Since free-floating bike share launched in Seattle this summer, it’s swiftly joined the suite of options Seattleites use get around town – and beyond! People have ridden the green, yellow and orange bikes near and far. Already, several of bike share bikes have shown up on the other side of Lake Washington, notably in Bellevue. Now, Bellevue city officials are evaluating whether to officially permit bike share companies in a city where there’s growing demand for biking as a transportation option.

The city has launched a community survey to identify interest and assess future use – and barriers – of bike share in downtown Bellevue. The potential with bike share is great, but many questions remain. Something that’s more certain: we at Cascade see one clear step forward to prepare Bellevue for a future bike share system – a connected network of protected bike lanes.

SAFE PLACES TO BIKE ARE ESSENTIAL

In Seattle and elsewhere, discussions around bike share have returned – time and again – to the issue of safe and connected places to bike. It gets back to one essential element – biking isn’t inherently dangerous, but the transportation systems we have built over the past century make biking and walking dangerous for much of our population. The work now is to recreate our cities into inviting, forgiving, and safe places for people – notably those biking and walking.

Protected bike lanes, as well as trails – like the emerging Eastside Rail Corridor – will be central hallmarks to the emergence of Bellevue – and the rest of East King County – into a place that is safe for caring neighbors and businesses to grow and thrive.

In Bellevue, efforts to build a bike network were kick-started in 2016 with the adoption of the “Bicycle Rapid Implementation Program,” a concept to get bike lanes on the ground in Bellevue fast, which was coupled with some funding dedicated to bike lanes through a new property-tax-based transportation levy. But it’s important to note as currently proposed, the downtown network would be a potentially confusing mix of sharrows and unprotected bike lanes, alongside some more inclusive shared use paths and protected bikes lanes. 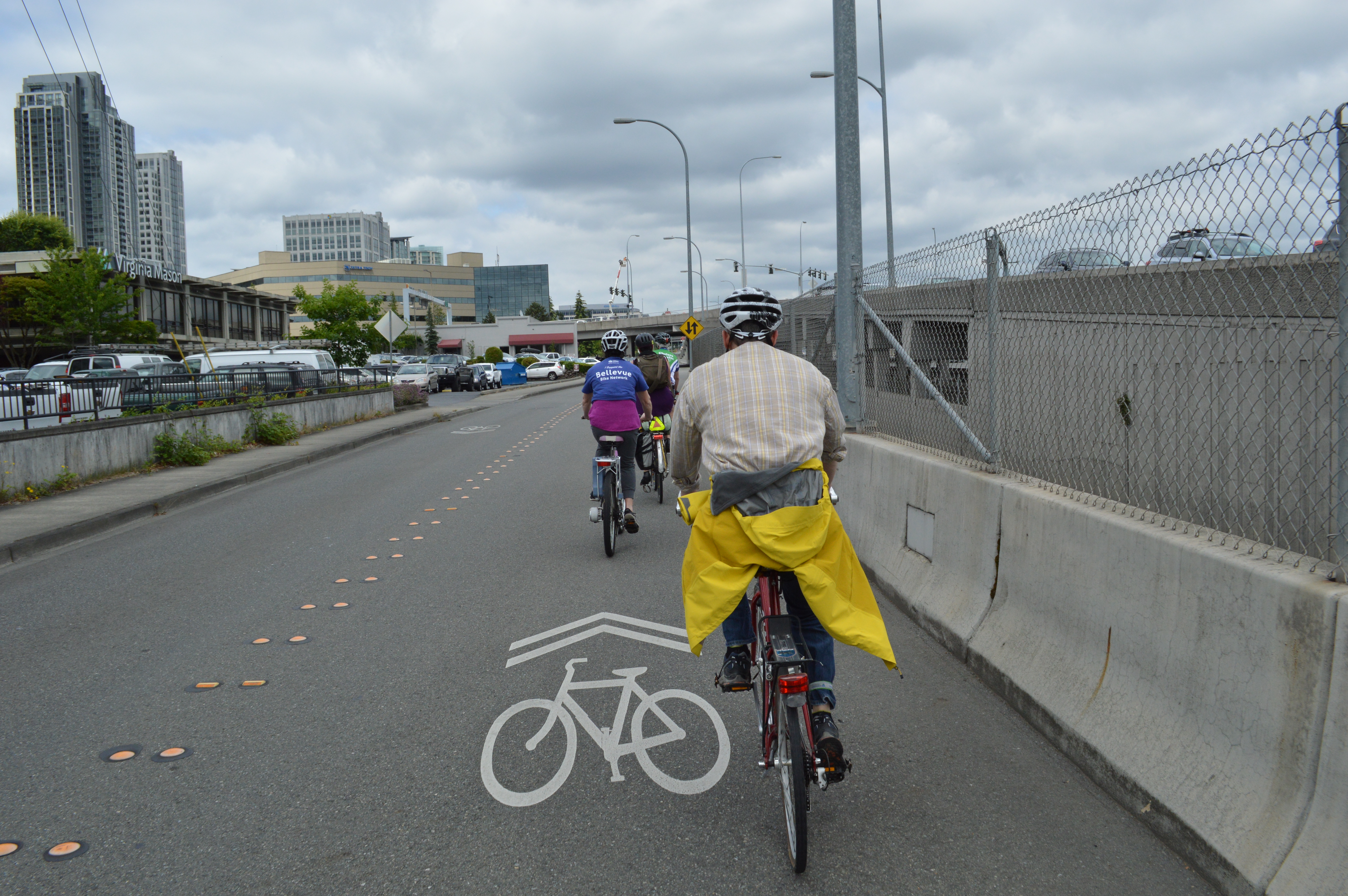 To date, there are no protected lanes in Bellevue, although new unprotected bike lanes (on 120th and Northup Way, for example) are beginning to fill in gaps outside of downtown for existing bicycle riders. But these bike lanes still lack the protection for a significant sector of the potential biking population – families and “interested but concerned” riders who might consider biking – and for whom bike share might be an easy opportunity to do so, if there are inviting places to bike. Click here and here to learn more about why protected bike lanes are important in areas like downtown Bellevue.

As for Bellevue’s downtown, those wanting to use bike share will be hard pressed to find any kind of safe, comfortable place to bike the last-mile from the transit center to a nearby business to work, shop, or dine, or to use bikeshare to get from the neighborhoods to, and through downtown.

The city’s bike share survey is a timely opportunity to let the city of Bellevue know that a network of protected bike lanes downtown is essential to a bikeshare system that feels safe, and is attractive to people of all ages and abilities.

BUILD IT AND THEY WILL COME

The same private funding model could help more people get around by bike in Bellevue too, without a cost to the public of running bike share. It’s an appealing proposition, but it will require investment by the city to make streets safer for people biking. 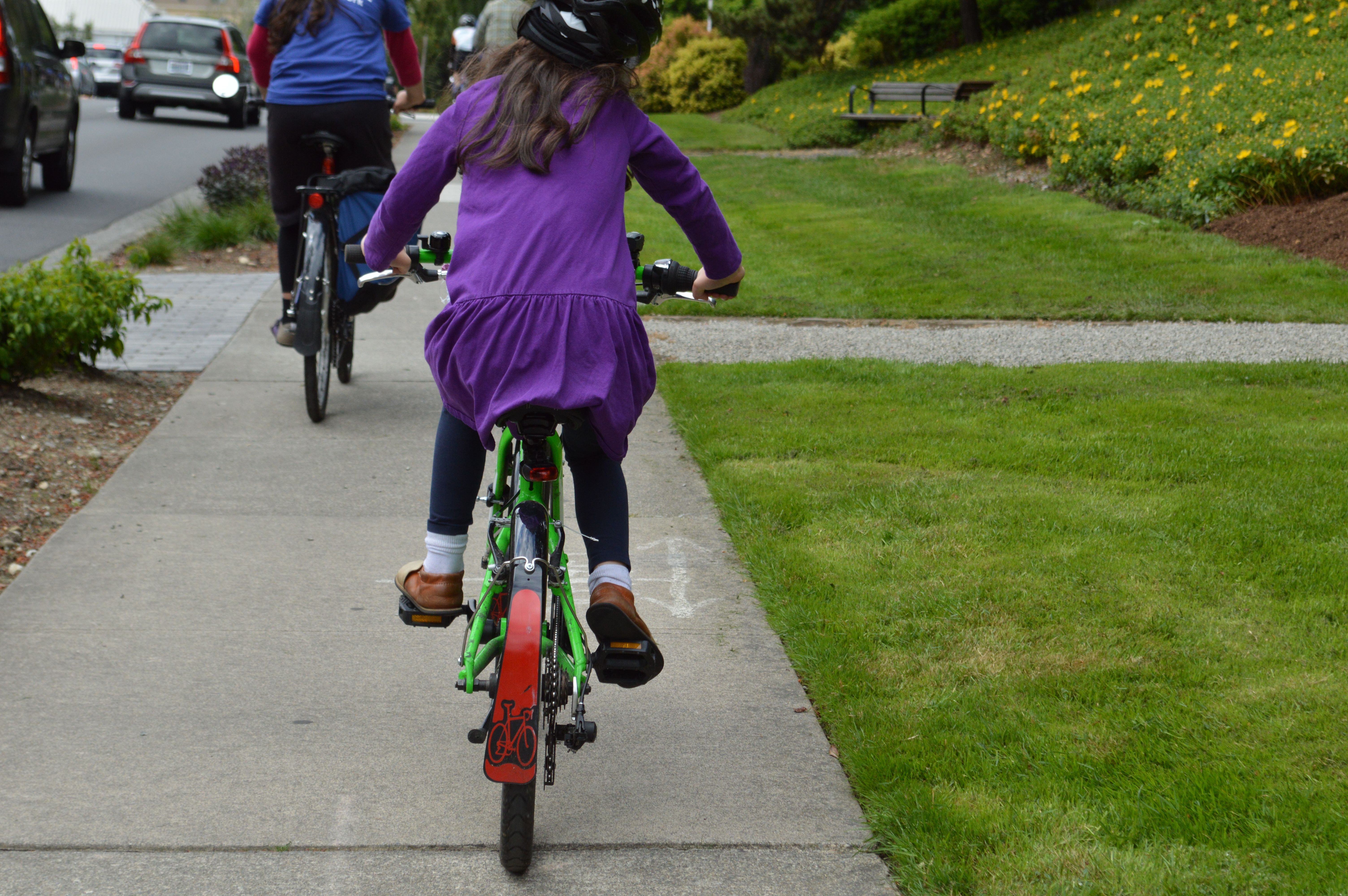 Without a protected bike network, there are few options to get around by bike in Bellevue.

Cascade believes urban communities like Bellevue need both bike share and safe places to bike — it’s not an either/or decision. But if we’re to see bike share succeed in the future, a key first step is to ensure that people of all ages and abilities feel comfortable riding in our cities.

Last year, the city of Bellevue committed funding to start building a Bellevue bike network. The next step is making sure it’s a network that works for people of all ages and abilities. Critical to holding the city accountable and creating a bike network that everyone feels safe using, is the voice of caring neighbors and community members like you.

HOW YOU CAN MAKE A DIFFERENCE

If you’re inspired to add your voice, in addition taking the short bike share survey we encourage you get involved by joining Cascade’s upcoming Advocacy Leadership Institute (ALI) training event. Through ALI trainings, community advocates and caring neighbors come together to learn about how and where to effectively add their voice to the work of making our streets safe for people walking and biking. Find out more about ALI, apply to attend (it’s free!), and help make sure downtown Bellevue has a protected bike network by 2020! 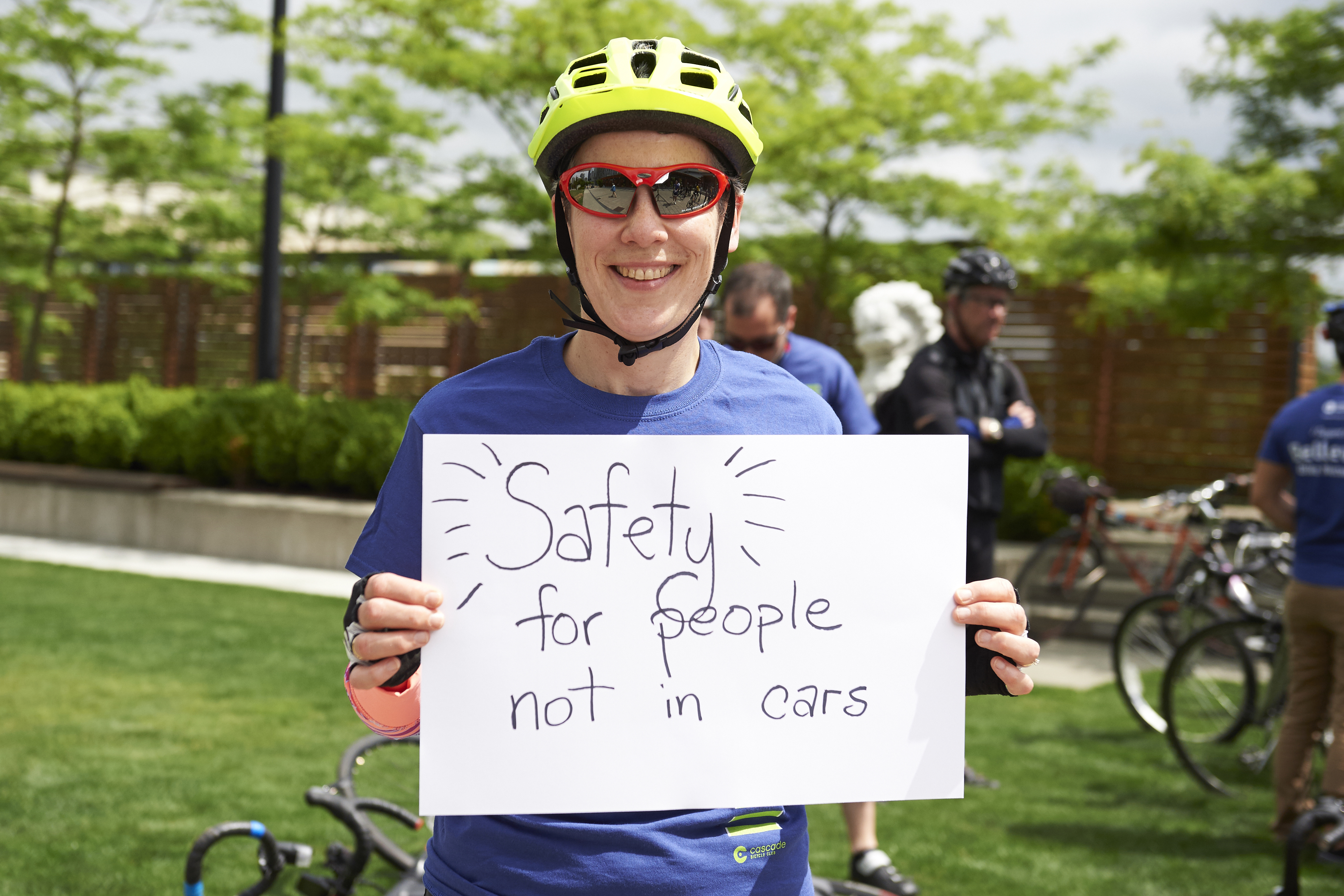 Telling Bellevue officials your priorities will encourage them to prioritize the needs of people walking and biking.