Coming Soon to Downtown Seattle: Safe Places to Bike on Pike and Pine

Sustained advocacy around the Basic Bike Network has catalyzed improvements to this coveted right-of-way.

In January, Cascade and our partners, Seattle Neighborhood Greenways, kicked off a campaign to ensure that the needs of people who bike would be represented throughout the One Center City planning process. The concept was simple: connect up the bike lanes we already have and form a Basic Bike Network that is safe and comfortable for users of all ages and abilities.

Less than 10 months later, thanks to the dedication of hundreds of advocates, we are seeing the vision come to life on downtown’s most highly-coveted right-of-way: Pike and Pine, where one in five trips is already made by bike.

The Seattle Department of Transportation has released designs for a Westbound bike lane on Pine and an Eastbound lane on Pike, connecting the 2nd Ave. protected bike lane into the downtown core. Initial prep work for implementation is already underway, with a plan to install as soon as this month. A separate Pavement-to-Parks project will fund planter boxes to beautify this new addition to our budding bike network.

Courtesy of Seattle Department of Transportation.

The designs show a mix of protected bike lane and shared-use lanes, and SDOT will make upgrades and iterative changes in the months and years to come. This interim solution will help inform designs for extending the bike lenes up the hill to Broadway. These longer-term improvements require more heavy lifting, such as capital work, as well as coordination with major development projects that simply takes more time.

But, let’s not underestimate this major improvement to making a safe and connected bike network a reality. This is a critical step toward building the Basic Bike Network, and it’s happening years ahead of previous plans, which had bike lanes on Pike/Pine originally scheduled for buildout in 2019. 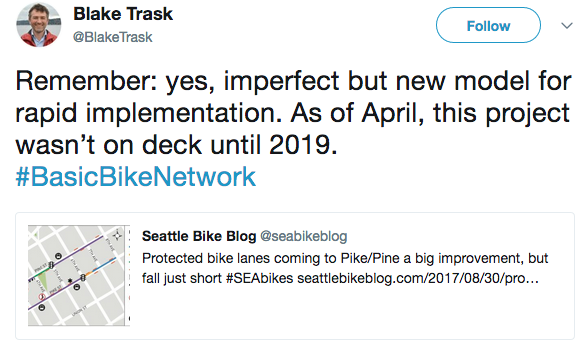 We are seeing the concept of a Basic Bike Network – fast implementation, with a period of testing and refining – come to fruition. Sustained advocacy is always needed to move the status quo, and with your support this year we are doing just that.