Latest Federal Court decision to allow King County to resume construction will result in a trail as soon as October. Sign up to keep up with the news.

Early this summer, the city of Sammamish ordered King County to stop construction of the East Lake Sammamish Trail (ELST), just as King County crews neared completion of the penultimate segment of the 11-mile trail. At issue was placement of stop signs in two locations on the trail. To resolve the dispute and complete the trail, King County asked the Federal District Court to step in and make a decision on the case. That decision came on August 8th when the Federal District Court ruled in favor of King County, meaning that construction can resume and the region is one step closer to realizing its vision of the Locks to Lakes corridorfor all to enjoy.

Once complete the ELST will run from Redmond to Issaquah, and could soon connect to the Eastside Rail Corridor. The ELST segment through Sammamish has been slow and litigious, in contrast to the trail through Redmond (opened 2011) and Issaquah (opened 2013). Completing the trail is a long-term priority of Cascade Bicycle Club, and pro-trail voices like yours can help – sign up to get involved.

This short video captures why the ELST matters to caring neighbors and people throughout the region:

The dispute centers around placement of two stop signs, where roads (206th Avenue SE and SE 33rd Street) cross the ELST in Sammamish. King County is building the trail and wants the stop sign on the residential access roads, given that the number of people using the trail is anticipated to be higher than the few that access the shoreline homes via these two roads. The city issued the stop work order as it believes the stop sign should apply to the many trail users, not the smaller number using the road.

The Resolution: Stop Sign on the Roads Not the Trail

This week, a full two months farther into Western Washington’s notoriously narrow construction season, crews are returning to the site to keep building it. On August 8th a written Federal District Court ruling affirmed that King County has the right to determine the stop signs orientation as the owner of the corridor right of way.

It’s a win for future trail users because orienting stop signs to stop motor vehicle traffic crossing the trail will make for a safer, more intuitive user experience, and will be consistent with trail crossings in existing segments of the ELST.

Back to Work; Trail Opening In Sight

Had the mid-June order to stop work not been issued, we’d be riding and walking the trail today. In the intervening two months of waiting for a court decision, the trail detour has sent people on foot on bikes onto the parallel route of East Lake Sammamish Parkway, a busy high speed arterial. With the County work crews back at work, we can look forward to walking and biking the trail – a safe, protected, connected route – by October. Sign up to hear the news first, and help us celebrate!

Sad But True: It’s Not Over Yet

While it’s looking like smooth sailing for finishing this 1-mile piece of the trail, the fate of the final 3.5-mile segment of the ELST through Sammamish isn’t as clear. Given the numerous lawsuits already launched over the trail, we’re staying vigilant and vocal about the importance of timely completion of the East Lake Sammamish Trail. Trails like the ELST are essential to our communities. Safe places to walk, bike and play – out of the way of traffic –  are essential to creating outdoor spaces for all types of users, regardless of age and ability.

Voices like yours matter and will help make sure the trail is completed in a timely way. Can we call on you to share your story about why trails like the ELST matter to you, your neighbors and your family? Sign up to hear when and how you can make your voice count. 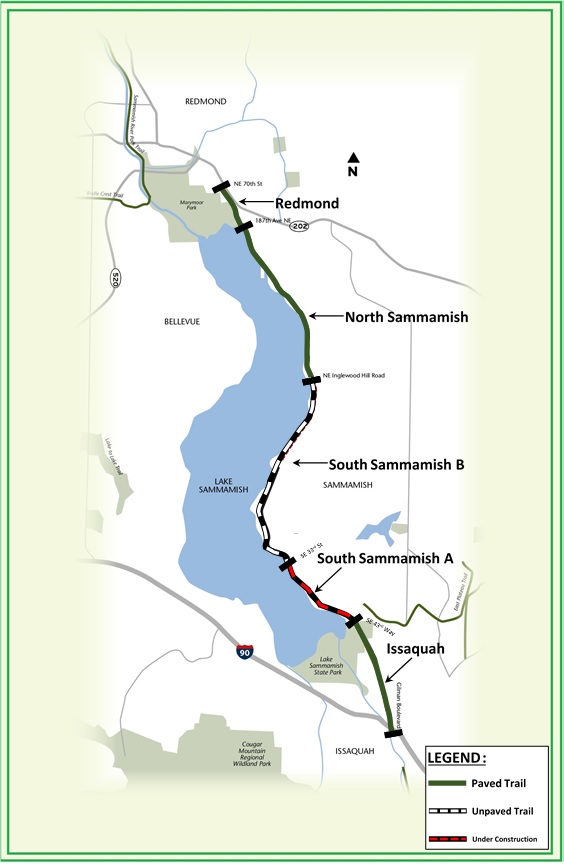 The 11-mile East Lake Sammamish Trail will connect Redmond to Issaquah via Sammamish.

Nick Jesch
Fri. Aug 25, 2017 2:13pm
The two options offered are both counterproductive. As a cyclist I can appreciate the no-control on the path. However, as a motorist, I highly object to being FORCED to stop (under penalty of money being taken from me at gunpoint) every time I come to that path. HOW about a less-restrictive option? Place a YIELD sign on theroadways, giving the motorists the option of NOT stopping if there are no bikes. That way, when there ARE no bikes, no stop required, when there is bike traffic, the car stops. Violating the yield when there IS bike traffic would be the same penalty as violating the stop sign all the time. Any collision would lay liability onto the motorise who failed to yield when required. Simple solutioin gives EVERYONE a break. WHY do so many situations ONLY consider two options when there are multiples? It was the same with the left turn lane at signals bill a few years back.... fine the cities who failed to "calibrate" their actuators for lightweight low steel content bikes, at HUGE cost.... why not a law that lets a cyclist, after coming to a stop and seeing their way clear, to simply make the turn, just as we now do at a right turn on red? Simple no cost solution. the thinking behind so many "bike improvement" projectsare so often high impact on SOMEONE< and very costly. Unnecessary. I've cycled Washington aggressivl since 1997, some hundred thousand miles, mostly on roads. I've got a bit of experience at this game........