From Zero to 70: The statewide network of permanent counters is growing | Cascade Bicycle Club
Skip to main content

From Zero to 70: The statewide network of permanent counters is growing

If you don’t count, does it count? Led by a Cascade-Washington State Department of Transportation partnership, Washington state is growing the largest permanent count network in the United States. 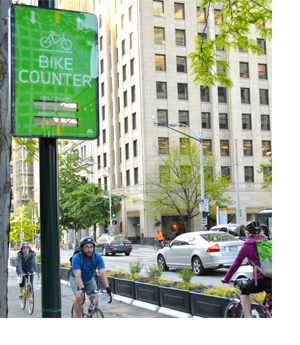 For decades, automobiles have been counted and that data has been used to inform how to make transportation decisions related to investments, safety, and mobility. Now, Washington state is moving forward to to collect the same data for bicycling. In 2012, one permanent bicycle counter existed in Washington State. By the end of 2017, there could be closer to 70.

In 2015 Cascade Bicycle Club was awarded a WSDOT Bicycle and Pedestrian Safety Grant to identify locations for the purchase and installation of up to 50 permanent bicycle counters across Washington state. Permanent counters will meet an increasing need to count cyclists in both the rural and urban context on a variety of facility types. Cascade has identified and recommended 31 sites across the state in 2016 that will be receiving counters. 2017 promises more of the same — the total number of counters will increase to approximately 50.

In 2017 counters will be installed in locations along the Willapa Hills Trail, in the Tri-Cities, Leavenworth, Spokane, Vancouver and other cities statewide.  Without permanent counters like these, it would be hard to know that approximately a million people ride bicycles across the Fremont Bridge or that over 114,000 people have used the Hains Levee Trail in Richland in 2016.

They will count bicyclists 24 hours a day, 365 days a year. A network of permanent bicycle counters will capture all trips, not just the commute to work trips that are normally captured. These counters will provide much-needed data to help better understand safety issues and trends in bicycling. The data collected will also help address a host of public health, economic and policy questions and will ultimately help develop a “bicycle miles traveled” estimate for Washington state.

While most counters have been installed in the more urban areas of Washington state, this project will identify locations that include both urban and rural locations and sites in both the Cascades and Pacific Coast to estimate bicycle trips across the state.

The project builds off the successful one-day National Bicycle and Pedestrian Documentation Project counts that WSDOT and Cascade Bicycle Club have been conducting since 2008 with the help of thousands of volunteers. These counts will continue to increase in value as a network of permanent counters is installed.  With both datasets, researchers can apply factors and arrive at the "Annual Average Daily Bicycle Traffic" (AADBT).

When implemented, the project will put Washington state at the forefront of bicycle counting and allow decision makers to understand and prioritize investments that make Washington one of the best states to ride a bicycle.

Cascade’s policy and planning work depends on the support of members like you. Please consider making a year end gift to support Cascade Bicycle Club’s ongoing policy work around the state to make riding a bike safe, connected and comfortable.