Downtown is the heart of Seattle, it is the nexus for employment, arts and shopping with destinations on every block and we need safe bicycle routes downtown so people can get where they need to go. In 2014 the city took a big step and launched the Second Avenue protected bike lane as a pilot project. Since then there have been a few other tweaks here and there to improve safety, and today, Seattle Department of Transportation began construction on more significant improvements, making it a permanent protected bike lane. This sets the foundation for building out a connected network of bike lanes downtown.

Construction began today, Monday, March 28, and all bike traffic will be detoured to Third Avenue until Friday, April 15.

The transition from paint and pylons to planter transforms the feel of the bike lane to a more comfortable space. Planters a more substantial barrier from moving traffic and they enhance the beauty of the street creating a nicer place to walk. These improvements were guided by community feedback and observation — people want more safe places to bike, that feel carefree and get them to where they want to go.

It will take even more people like you to speak up for safe protected bike lanes to be built in downtown. Add your voice and join Connect Downtown here. 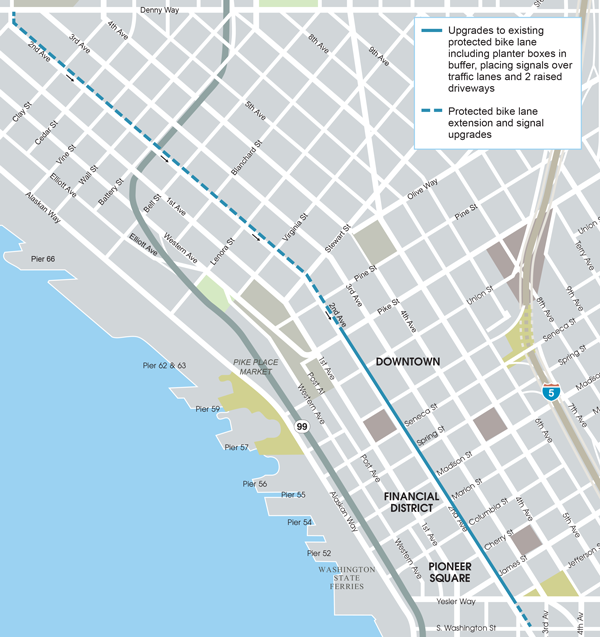 The new and improved signal placement will provide more clarity and consistency for people driving and turning left off of Second Avenue. Clarity of where to go and when will increase compliance of people moving through the intersection when they have the green light.

Construction also includes raising the bike lane in front of passenger load zones and parking garages that cross the protected bike lane. This is a great way to increase awareness of people biking in the protected bike lane that they are entering mixed space where people and vehicles might be present and encourages travelers to look out for each other.

We will see a short extension south on Second Avenue for one block from Yesler to Washington. This small improvement is a step towards connectivity, but we need a lot more connections to all of the surrounding neighborhoods. Later this year we hope to see progress on the much anticipated extension north from Pike Street to Denny Way.

Building this extension is good step, but we need to keep going. Steep hills between blocks is a huge disincentive for going out of your way to take a protected bike lane. That is why we need a whole network of bike lanes in downtown that will help people get where they want to go, and we need people like you to help make it happen.

If you would like to see more protected bike lanes downtown, join Connect Downtown to get plugged in.

Steve Plate
Wed. Apr 13, 2016 4:58pm
There is still a problem with motor vehicles turning left against the red left turn arrow. Yesterday over 10 minutes while waiting for a bus I saw 4 light changes in which vehicles turned left as soon as the green go straight arrow was lit. In one case while the first vehicle in line waited for the turn arrow to turn green, the second vehicle in line honked the horn and finally changed lanes to pass the first vehicle and then turned left from the center lane against the red turn arrow. Perhaps more enforcement is needed.

Briancooper Mcbride
Wed. May 20, 2020 8:26pm
If you are looking for a healthy deit plan...! Here we offer you a <a href="https://fibroexpress.com/blog/fibromyalgia-diet-plan/">fibromyalgia diet</a> plan for free of cost.

King King
Fri. Aug 21, 2020 10:37am
Intriguing post. I Have Been pondering about this issue, so much obliged for posting. Really cool post.It "s truly extremely pleasant and Useful post.Thank<a href="https://mxplayerapp.download/download-install-mx-player-for-firestick">mx player firestick</a>

Riding in the Rain and Living Car-Free