City Council votes in favor of a better bike share

The future of Seattle’s transportation system is bright, with the soon-to-open light rail stations, a new streetcar line, and investments in better bike infrastructure and bike share. Yesterday Seattle City Council voted in favor of acquiring Pronto Cycle Share with a vote of 7–2.

Many Seattle residents testified in support of the acquisition, sharing with council members how Pronto helps them get around the city. Sharon Cowdery, who lives in Belltown, said, “I use [Pronto] at least once per day. It’s allowing me to continue a life that’s also a bit unique — I don’t own a car — and Pronto is making that possible.”

Cascade thanks council members for approving the acquisition and creating measures that will create a bike share system that works better for more of our residents — including a safe bike network in downtown and community engagement to ensure that bike share serves all people equitably.

Unanimous support for an amendment proposed by council member Mike O’Brien commits Seattle Department of Transportation (SDOT) to build five protected bike lanes in downtown prior to expanding bike share. (See the identified bike lanes highlighted in map below). When completed, this network will provide a safe way to bike from North Seattle all the way through the city to the International District. This amendment is a win-win for everyone who bikes, enhancing the usability of bike share, while also quickly improving street safety for all. 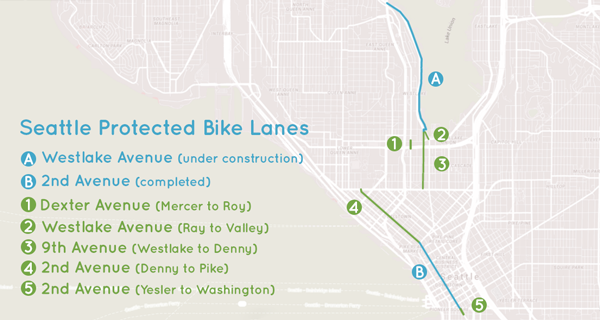 Council member Rob Johnson stated his support for the amendment elaborating, “a bike lane is only a bike lane when an eight-year-old is safe enough to ride in it... when my daughter can ride in city streets.”

By bringing bike share under the SDOT purview, Council has effectively redefined our bike share system as a public good that will serve all people in Seattle. Council member Lorena González added a thoughtful amendment that funds engagement with communities of color and low-income communities, to to identify those communities’ needs, and define an expanded bike share system to meet those needs. In this debate it became clear that bike share is now a public good, part of our transportation system and worthy of investment. Both of these amendments were passed unanimously by council, demonstrating a commitment to creating equitable access to public transportation.

“This is an opportunity for us to really integrate the system… so everybody can get around our city… having a bike share program that works will contribute to our transportation system,” said Council member Sally Bagshaw.