Twenty-twelve was a bad year for American competitive cycling. It’s the year that Lance Armstrong received his lifetime ban and was stripped from his seven Tour de France titles. And in the midst of the controversy, his former teammates withdrew from the summer Olympics, placing the hopes for an Olympic cycling medal on the women.

And the women delivered: Kristin Armstrong secured the gold in the individual time trial, Georgia Gold received a bronze medal in cross-country mountain biking and Sarah Hammer earned a silver medal in the women’s omnium.

But perhaps the most inspiring story came from the four underdog track cyclists, who on August 4, 2012, took home the silver Olympic medal in the women’s team pursuit – the first U.S. women's track cycling medal in over 20 years!

Among them was Kirkland-native Jennie Reed, a World and US Champion who got her cycling start right here, on our local Marymoor velodrome.

The incredible feat and story of Reed and the rest of 2012 women’s team pursuit squad has been captured beautifully in Sky Christopherson’s latest documentary, Personal Gold.

Praised and marketed as “the best underdog story since Rocky”, Personal Gold follows the underfunded athletes during their last two months of preparation leading up to the 2012 Olympics, during which they turned to friends, family, and a 'Data not Drugs' experiment to attempt the impossible: win the first U.S. Women’s Track Cycling Medal in over 20 years.

On April 11, Cascade members are invited to a private showing of Personal Gold with Olympians Jennie Reed, Sarah Hammer and Dotsie Bausch in attendance.

“You don’t have to be an athlete to see the film,” said Jennie Reed. “It’s for anyone who’s ever been told they couldn’t do something.”

Leading up to the 2012 Olympics, doping scandals put cycling in a bad light and funding was lacking.

“We had such limited resources, no mechanic, no soigneur and one [employed] coach among the four of us. We were writing our own training and workout programs,” Reed recalled. “On paper, there is no way we would have won a medal.”

But while the country and USA Cycling paid little attention to them, the athletes received help from those who believed in them the most: their friends and family. “Our husbands dropped what they were doing to help us,” said Reed, whose husband quit his job and sold their house to join Reed in Mallorca, where they were training.

“We all came together as a team. We had a bond that was definitely unique. We surrounded ourselves with those who believed in us and it gave us the confidence to ride beyond ourselves,” said Reed.

Shocked by the little support these athletes were getting, friend and former track cyclist Sky Christopherson wanted to help out. Intrigued by data as a tool to make performance gains, Christopherson had recently founded a company called Optimized Athlete which specializes in tracking health and performance through glucose and sleep monitors as well as genetic reporting to indicate nutritional needs and muscular capacity.

“It was an unconventional approach because it hadn’t yet been applied in the elite athlete sector,” said Reed. But as other countries were pouring tens of thousands of dollars into technology and equipment, the US pursuit team needed every little performance gain they could get.

This meant better sleep and data-driven training and even, filming.

“[Christopherson]has a background in film and started filming us for analysis. But he got progressively more involved and started filming the whole process, unsure where it would lead,” said Reed. “After we won the medal, he decided that there was an incredible underdog story there.”

That footage is now the base of the documentary, Personal Gold, which will make the film festival rounds soon.

“You know how the story ends but to see what we went through and was goes into the day-to-day…it’s powerful,” said Reed. “Watching it brings back a lot of emotion and humble pride. To see how much doubt I had and the many odds we had against us. It’s still surprising almost that we did it. So much of it was about doing something great for someone else, for the team, for personal gold.”

Cascade members are invited to special, private screening of Personal Gold on Saturday, April 11. Athletes Jennie Reed, Sarah Hammer and Dotsie Bausch will be in attendance for a Q&A following the film. Doors open at 6:30 p.m. and tickets are available at  Proceeds benefit our local Marymoor velodrome and the Jennie Reed Foundation. 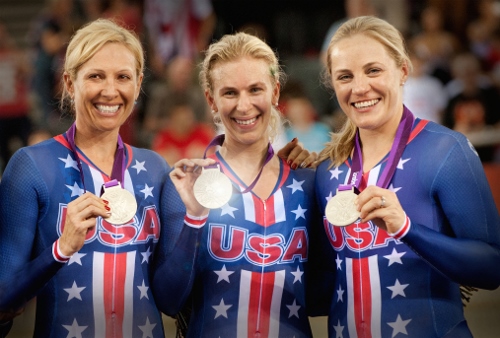