Traffic garden in Utrecht, the Netherlands. Photos courtesy of Streeflims.

In 2012, I had been working at the League of American Bicyclists for about six years when my husband and I were invited to a meeting about a park that was going to be constructed three houses down the street from ours, next to the bike trail that runs throughout Northern Virginia.

A few neighbors and I talked in advance of the meeting about what we’d like to see as a park. With sudden clarity, we realized we needed a bike park. We lived on the top of a very steep hill, and teaching our kids to ride bikes was a frustrating experience. You could either, as a colleague of mine did, take the pedals off the bike and let the child coast, only to realize they were going too fast for you to run after (he did catch his daughter before any harm befell her); or you could dodge cars in a parking lot after hours. Neither were ideal. 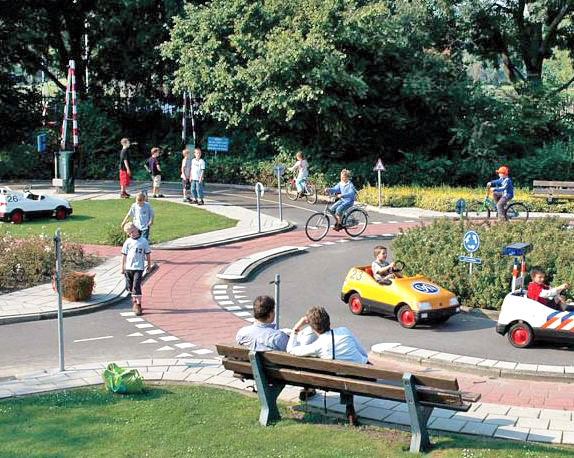 What we wanted was a traffic garden: a loop with traffic signs and a play space in the middle, where parents could teach children to ride. We added air pumps, waterfountains and park benches where all cyclists on the trail could rest and meet up with friends—as well as some clear signs saying SLOW, CHILDREN AT PLAY to separate the kids’ loop from the regular trail—and ta da! A park took shape.

Learning how to do local advocacy was a great experience for me. Working with county employees, visiting other neighborhood associations to present the drawings and negotiating how the finished park would include local plants and recycle water was fun and fascinating. And just last month, I heard from several former neighbors that construction will begin in early 2015.

We live in Seattle now, a bit too far away to teach our children to ride in it, but I’m still thrilled to have worked on it. And, in great news for our region, with support from people like you as a part of a fundraising effort we will launch this year, Cascade’s new Bicycling Center will feature a traffic garden of our own. This garden will be where generations of Puget Sound children can come to learn to ride, interact with other modes of transportation and maybe even enjoy some hot chocolate.

Speaking of which: we’re moved in (30 volunteers helped us move by bike on Nov. 30!), the coffee machine is plugged in and we’re ordering couches for the member and visitor center, which will also have bicycling maps, books and routes. Please stop by for a tour or just to hang out! We’re right off the Burke-Gilman Trail at 7787 NE 62nd Ave, Seattle, WA 98115.

Thanks for all of the local advocacy you do on behalf of bicycling in this region. You are improving lives through bicycling, and I am so excited thinking of all that we will accomplish together in 2015.