Have a Bikey Halloween!

My reign as queen of the bikey kid costumes started four years ago with an old-style “man-in-a-house” sharrow costume. I can’t remember what gave me the idea—it may have been as simple as finding the large piece of black felt at the thrift store for three bucks. I cut a cardboard box into two “houses,” (my crafty friends will gasp at my technique now) stapled on the black felt, and taped on paper cut into the shar- row design. The shoulder and side straps were from an old, holey reusable shopping bag, also stapled on. Absolutely zero sewing involved. Since I’m a benevolent dictator, I honored my sharrow’s love of trains and made a train-themed trick or treat bag with left over felt: a plastic cookie container with white paper taped to the inside, and a little battery-operated flickering candle light glowing through cut-out train shapes in the felt, with old ribbon tied through holes in the lid as a handle. 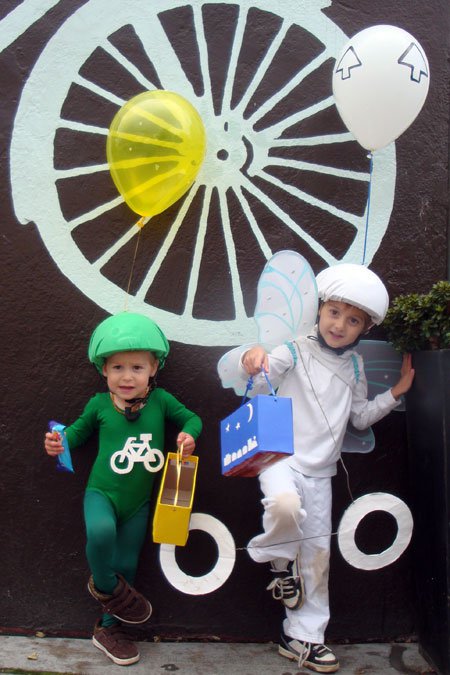 The following year we moved on to better bike infrastructure with bike box (the green box at the front of an intersection where bicyclists wait in front of cars during red​lights) and bike lane icon. The favorite-thing-themed trick or treat bags (yellow puppy and blue train) weren’t enough to keep the kids from messing with my brilliant ideas: bike lane icon kid insisted on adding fairy wings to his costume while bike box kid wanted a balloon on his head, too. I don’t think they would have been more recognizable without the extra stuff so I didn’t fight it. This was my first attempt at covering their helmets (with fabric from old T-shirts), which isn’t very easy for the non-crafty parent, but came in handy this year when I re- used the skill for an R2-D2 helmet on our Star Wars Day Kidical Mass family ride. 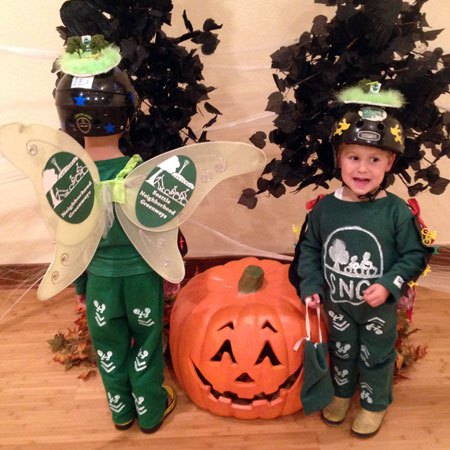 And finally, Halloween 2012: two Seattle Neighborhood Greenways kids! I thought these ones were pretty fun. I affixed traffic circles to the tops of their helmets and made velcro-on black felt strips of road (so I could remove them when donning jackets) shared by bikes, motorcycles, and dogs. Even with the signage on their backs, I had to explain the costumes to many people. But in doing so, I wasable to educate my neighbors about our Greenways group.

Sadly, my days of dictating the kids’ Halloween costumes are over, but I had a good run, which included three years of bicycle infrastruc- ture outfits. As far as I know there are no ready-made bicycle infrastructure costumes for purchase (yet). I’m not very crafty, but as long as I recog- nize the end product and the kids are happy enough, I’m satisfied. And when that one in 100 passerby shouts, “Hey! Bike lane guy!” It’s icing on the candy corn cake. My kids will be in boring store-bought costumes this year—and they’re ecstatic!

But I hope to catch a glimpse of something creative and bikey as we wander the streets of Wallingford.

Back to school means new learning opportunities for all