Normalizing the ride through fashion and function

Find them: at their shop in Fremont Neighborhood in Seattle

When Hub and Bespoke owners Juliette Delfs and Aldan Shank released their “Women’s Riding Coat” in Winter 2013, it was the topic of conversation among female Cascade staffers. It was stylish enough for fall fashion, yet functionable for rainy Seattle bike commutes.

And as women oohed and awed, Hub and Bespoke’s male customers were feeling a little left out.

“One of our customers from Portland emailed, called and stopped by three times asking for [a male version of that coat]… on one visit he pitched why it was the perfect coat,” Delfs explained.

Delfs and Shank says most jackets designed for bicycling are “quite sporty”, which is fine for on-the-bike, but it’s not what either of them would want to wear to a business meeting or going out for a drink with friends. 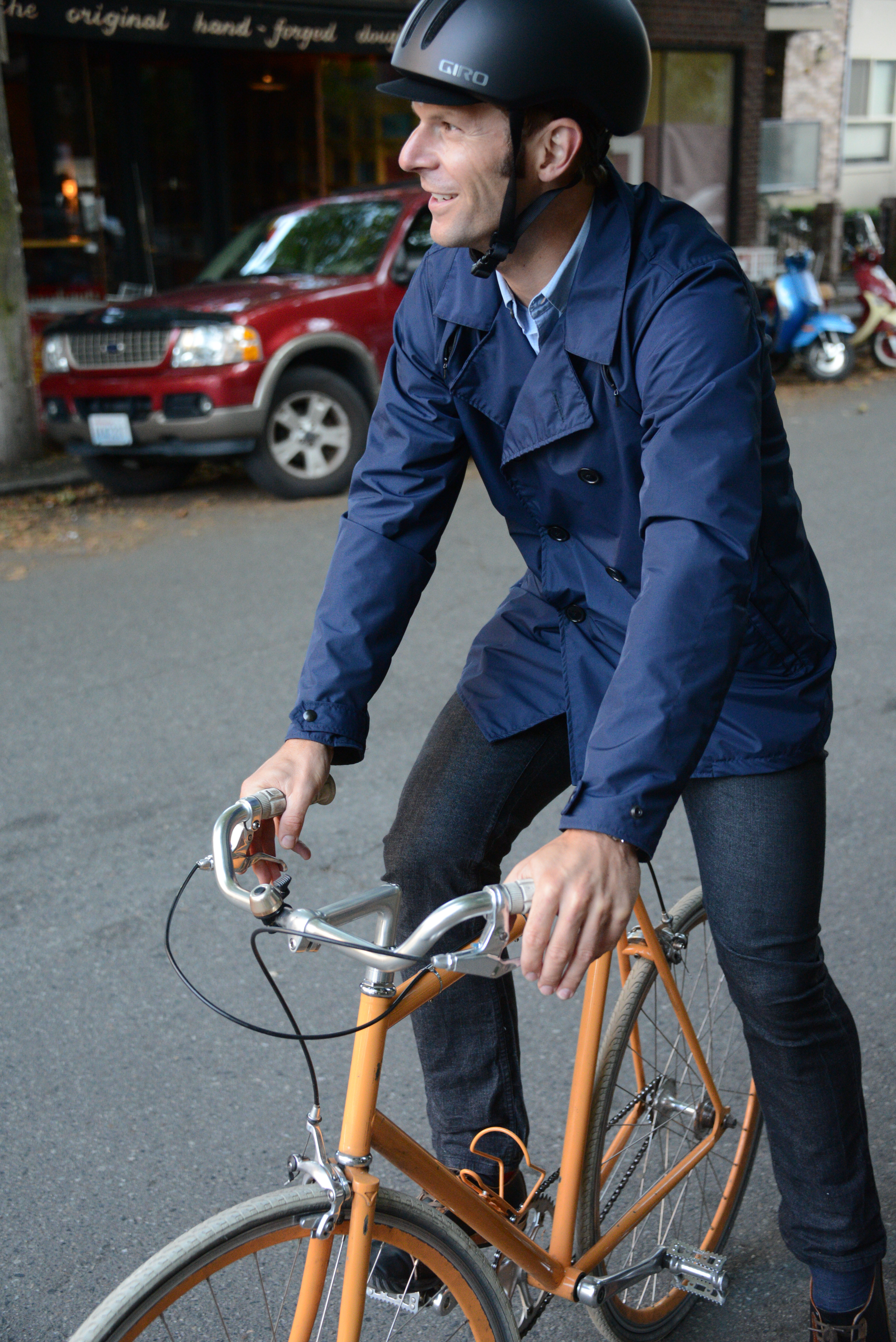 So what’s a guy to do? Bringing an extra jacket to work can be a nuisance at best, so many who commute by bike just settle for one or the other. That’s why Delfs and Shank are releasing a coat that “doesn’t compromise,” with the hopes to not only serve their customers but to perhaps change the way people perceive bicycling.

What’s more, this coat is not only customer-inspired, it’s also customer-funded. Hub and Bespoke recently launched a crowdfunding campaign on Crowd Supply -- a platform that specifically supports product developers -- to support the project. The campaign seeks to raise $15,000 to fund material procurement and coat production in Seattle. The financial backers benefit by getting the yet-to-be-released jacket at a discount price.

For Delfs and Shank, it is a lot less risky than a business loan, they explained.

“I’d rather not borrow money – I’d rather know where I’m at. So [crowdfunding] this at least allows us to break even, validate what we are doing and then take it to the next step,” says Delfs. 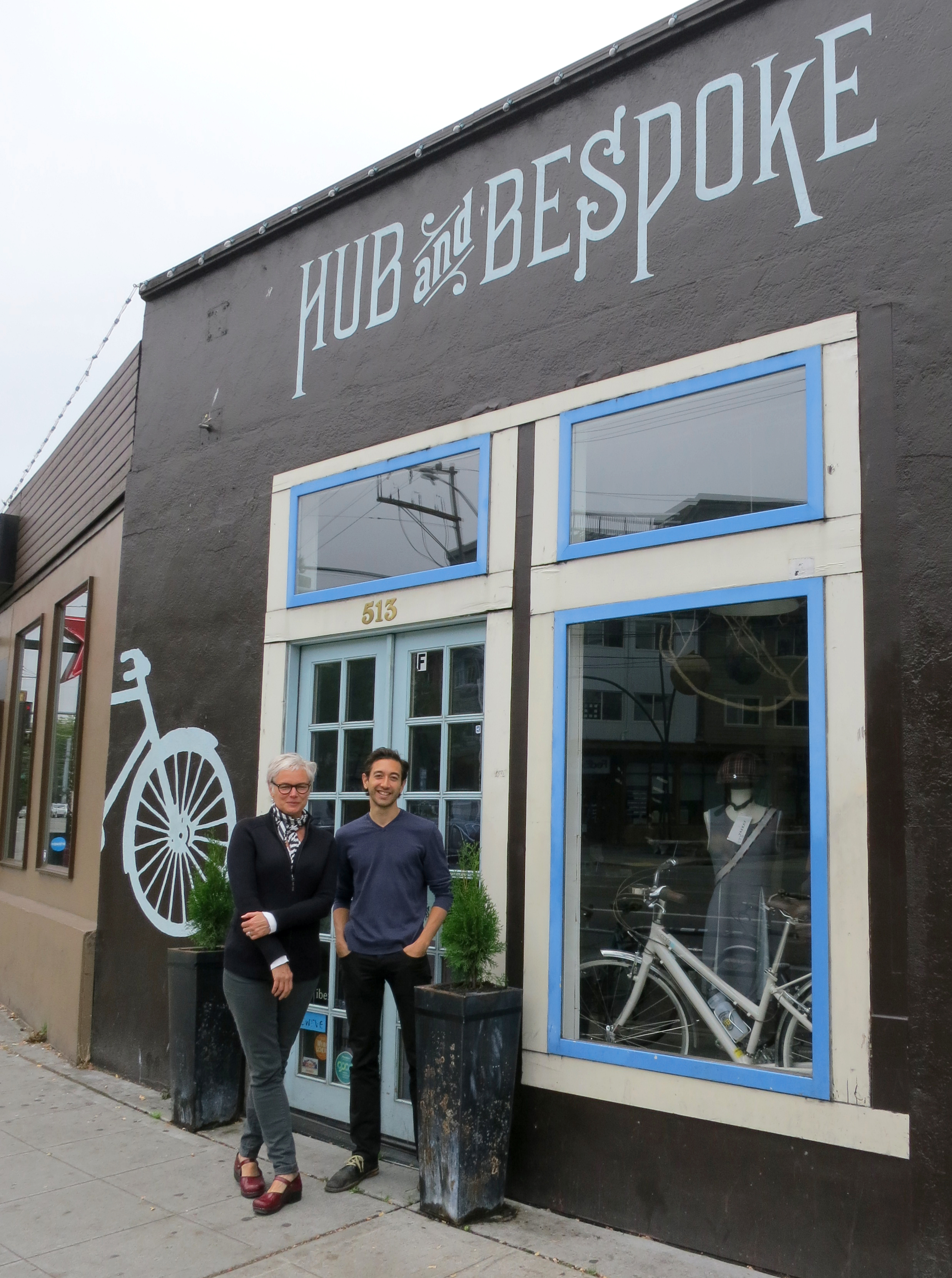 When talking with Delfs and Shank (pictured right, in front of Hub and Bespoke), it is apparent this jacket is more than just a piece of clothing; it’s about turning heads,safety and changing minds.

“There’s a lot of people who would like to ride but aren’t. If it looks like something that is really aggressive and sporty and exclusive, it is going to be harder to get those folks off the sidelines and riding.” - Aldan Shank

The act of turning a head is worth more than a compliment to Delfs, who says “people looking at you – that creates safety.”

She’s also personally experienced how her clothing can start what she calls “happy conversations,” these are the kinds of interactions that change people’s mind about who a cyclist is. A concept she studied in graduate school, Delfs says things like her helmet covers “bring people along instead of creating resistance.”

A very different approach from what many have tried before her - most notably captured by Portlandia TV series in the short “Bicyclists’ rights!”

Delfs and Shank say if this is successful, they will move on to fill other “holes” in the marketplace, especially for women.