Pronto Cycle Share is launching next month, and membership sales start in just a few days!  We are so excited about the launch of bike share in Seattle that we simply couldn't wait any longer. We had to give these bikes a try! Luckily, Holly Houser, Executive Director of Puget Sound Bike Share, was kind enough to invite us down to her South Lake Union office to take a prototype bike for a spin.

A product of Alta Bicycle Share, the bike is similar to the bike share bikes you’ll find in New York, Minneapolis and DC, meaning they're sturdy, upright and utilitarian. But the Seattle version has one important addition -- well four to be exact -- and that is a seven-speed internal hub instead of the more common three-gear. This should allow the average user to tackle the hills of Seattle.

We didn't take the bike up Queen Anne or anything but we did take it up an 8% percent grade and it spun uphill surpsingly easily (while seated), given that it weighs about 40 pounds.

"It's kind of like a cruiser," commeted Tim O'Connor, tech manager at Cascade. "But without the drag."

And the gearing isn't the only feature that will please Seattle users. The bike has full fenders to keep you dry;  a chain guard to keep your pant leg or skirt from getting greasy or worse, torn; and bright front and rear lights that are powered by a dynamo hub and turn on the moment the bike is in movement.

The front basket seems like an odd design at first glance, but with the provided bungee cords, works splendidly. Other features include flat - and train track -proof tires, a bell and adjustable seat height. 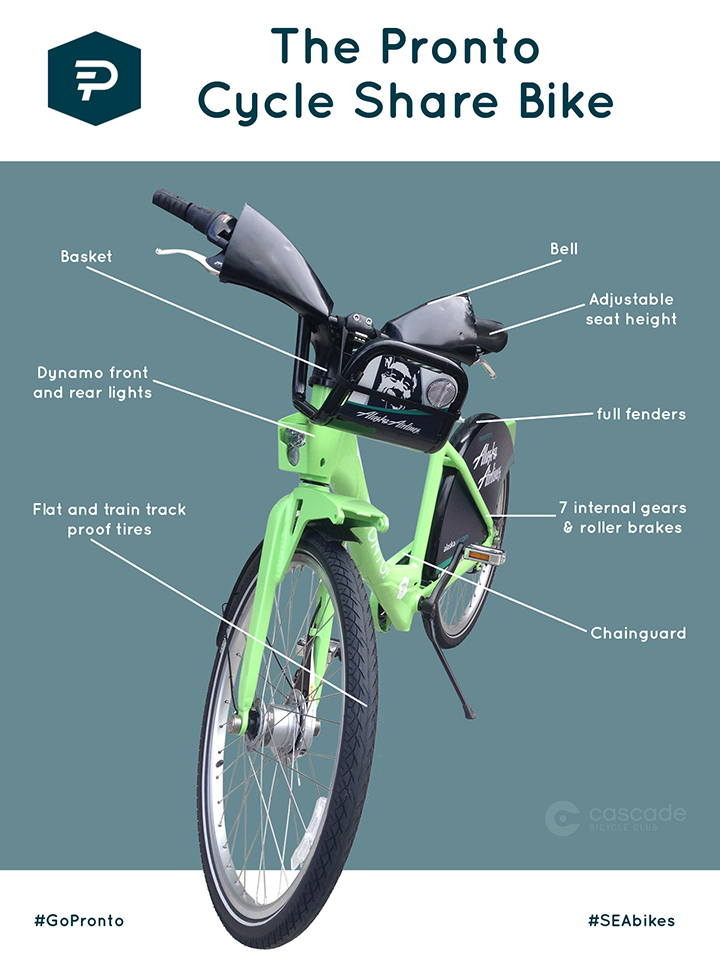 The overall verdict: we love it! And we hope you will, too.