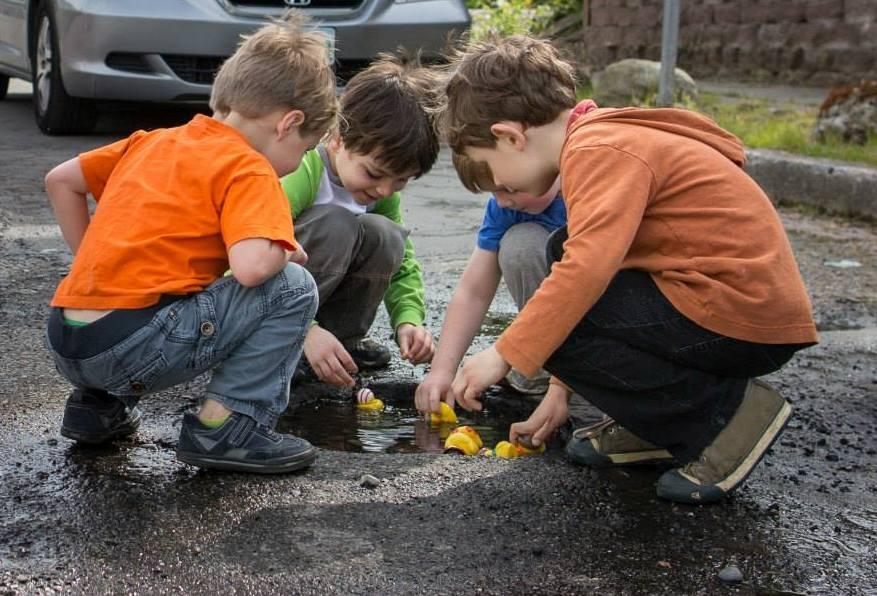 You’re probably wondering what’s going on here. Why are these kids playing with rubber ducks in a pothole in the middle of the street?

You might not believe it, but they’re actually hard at work. They’re working toward making our streets safer for everyone (one rubber duck at a time). They’re using these ducks to document the scale of potholes on proposed greenway routes throughout the northern section of the 23rd Ave. corridor.  Whether they realized it or not, they’re helping create a better future for everyone who chooses to ride, walk and play on residential streets in Seattle.

Collectively, participants rode, walked and evaluated these four route options through the hilly corridor to determine the best residential streets for neighborhood greenways.

Most participants noted the need for not one, but multiple greenway routes on both sides on the 23rd Ave. arterial. The corridor poses unique challenges that make creating a truly “all ages and abilities” biking and walking route nearly impossible if we are limited to only one route.  24th Ave. bisects the corridor, which, combined with lack of safe crossings and the hilly topography, severely limits where most people feel comfortable riding a bike.  A multi-route network of neighborhood greenway streets could empower bicyclists and pedestrians to choose their route among a selection of comfortable and convenient routes based on destination, time of day, weather, type of bicycle being used (like a family bike or single speed) and other factors that might play into where and when people ride or walk.

Silly Hilly participants took notes, tweeted pictures of challenging intersections and pavement conditions (with #SillyHilly) and, most importantly, played a vital role in helping us reach the following proposals for the greenway:

Everyone agrees that planning this section of the greenway poses many challenges. Planning for “all, ages and abilities,” while taking distance, connectivity, grade, lighting and safety into account is no easy feat. We believe that providing multiple route options up the hill will give people more flexibility to choose their routes based on individual preferences. In the short term, we’re excited about a convenient connection on Peach Ct.  In the long run, however, we envision an even more connected network of neighborhood greenways where bicyclists and pedestrians will have multiple options on both the east and west side of the 23rd Ave. arterial.

What do you think about this hybrid route concept? Let us know in the comment section below!