Thank you volunteers for a great party! 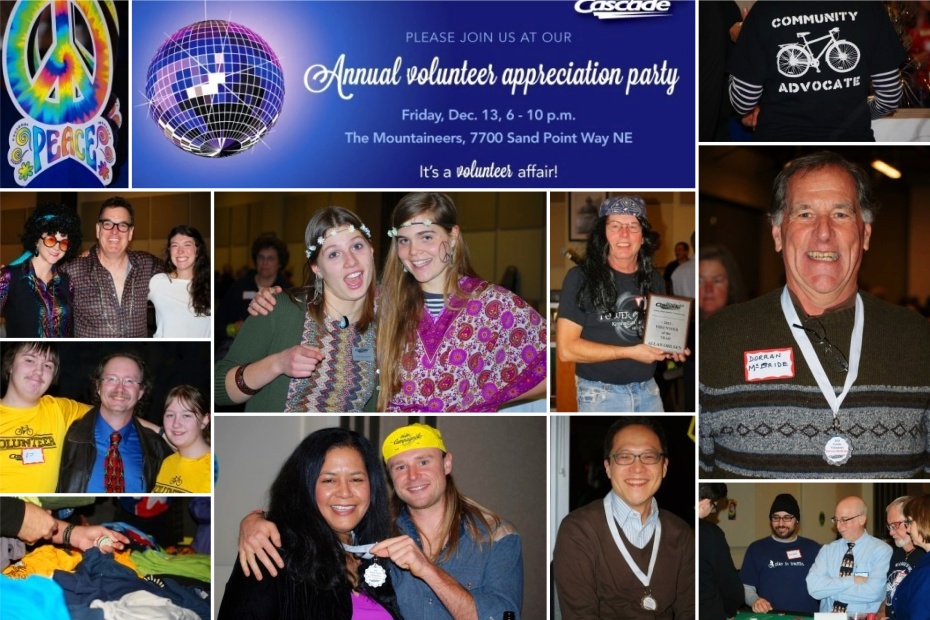 Thank you to all the volunteers who came out to the annual volunteer party. We celebrated another great year with a 70s-themed party filled with costumes, music, Casino games, good food and great company.

Congratulations to all the volunteers who were recognized as "department volunteers of the year" for their exceptional dedication to the club as well as the thousands of volunteers who went unnamed. You make our work possible!

Special recognition goes out to Allan Ohlsen, who was awarded the 2013 Cascade Bicycle Club Volunteer of the Year title. Allan has been volunteering for Cascade since 2002. You will find him at Chilly Hilly packet stuffing parties; helping to mark the route for Red Bell,  STP and Seattle Bike 'N Brews; and as 'volunteer at large' at Expo.  Thank you, Allan!

We also want to thank outgoing boardmembers Kevin Carrabine, Michael Snyder and Emily Moran for their years of service in guiding the club.

Kimberly Kimberley is a classic example of a casual cyclist who becomes a super cyclist. She started by coming on Free Group Rides in 2006. She participated in the Cascade Training Series (CTS) and many of Cascade’s events. As her experience increased, so did her skills and pace. She became a ride leader and soon started leading rides. These days she leads Brisk (16-18mph) rides, helps with CTS and  took on a lead role in the development, design and purchase of the highly prized CHEW jersey.

Dan Garretson has been a Cascade Ride Leader for 23 years. Dan is recognized as a source of information for new ride leaders on the subjects of bicycle purchase, maintenance and mechanical modifications. Dan is sought out by many riders as an"expert" when they are considering upgrading or buying a new bike. Dan is the FRUMPS (Friday Riders for Unemployed Married Peddler’s) coordinator and a supporter of TREATS and WRUMPS repeating rides.

Dan is known as an organized and careful ride leader, who is viewed by riders as a skilled and thoughtful coach providing expert advice and mentoring.

Thank you Kimberly and Dan!

Check out our Facebook page for photos from the event.