Seattle already has two automated bicycle counters –on the Fremont and Spokane Street bridges –and we might get a bunch more!

Last week, the Seattle City Council Transportation Committee authorized the acceptance of a gift of funds from the Mark and Susan Torrance Foundation and Rails to Trails Conservancy to be applied toward the purchase of seven more bike counters. The ordinance now goes before full city council for a vote. 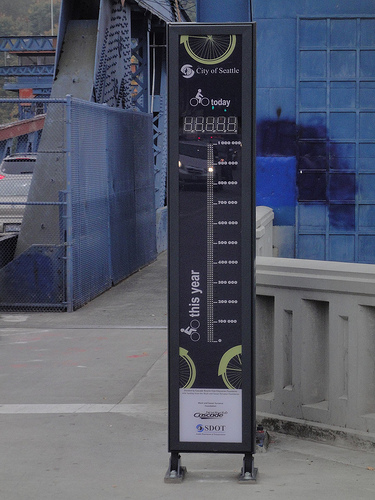 Unlike the two existing bike counters, not all of the proposed bike counters will have electronic display totems. But while they may not be as visually appealing, these counters will be an important addition to SDOT’s data collection program and will allow improved measurements of the city’s progress toward getting more people to travel by bike and to help determine what additional bike infrastructure would be most beneficial.

“The more that we have information and data on the use of the city’s streets by bicyclists, the more we’ll be able to plan successfully and build successfully for a great bicycle system,” said Tom Rasmussen during the transportation committee hearing. “So these counters will help us a great deal.”

Benchmarked for 2014, the proposal calls for the following counters:

+ A combined bicycle and pedestrian counter on:
- the Mountains to Sound Trail near the I-90 Bridge
- the Elliott Bay Trail in or near Myrtle Edwards Park
- the Chief Sealth Trail
- the Burke-Gilman Trail (exact location TBD)

+ bicycle counters without a display on:
-  the Broadway Cycle Track
- along a neighborhood greenway (exact location TBD)

Like the current counters, the data collected by these counters will be posted on a website for the public to see.

Richard Ewing
Fri. Sep 20, 2013 10:04am
It looks like the Fremont counter is more preferable tuned. I’ve seen it miss me maybe quite a few times out of the many hundreds of times I’ve crossed, while being missed via the WS bridge counter will be a several times a week occurrence.