We are excited to announce that Elizabeth Kiker will be Cascade Bicycle Club's next executive director. She will begin on Thursday, Sept. 5. 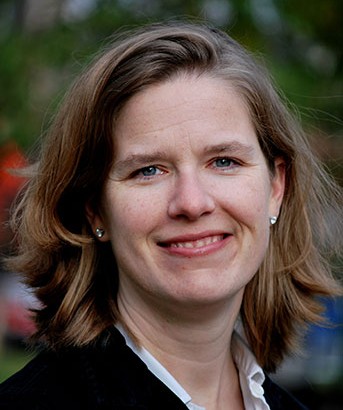 “The board of directors has conducted a comprehensive nationwide search, and we are very pleased to welcome Elizabeth Kiker as Cascade Bicycle Club’s next executive director,” Board President Daniel Weise said. “Elizabeth brings proven experience building collaborative relationships among members, supporters, external partners, community leaders, and diverse communities that will be essential to the continued success and growth of bicycling in our region.”

Kiker joins Cascade with a strong background in bicycle advocacy, having worked at the League of American Bicyclists for almost eight years, and most recently served as the organization’s Executive Vice President. While at the League, Kiker launched a successful major donor program, led an overhaul of the member relationship management system, and helped streamline and grow the Bicycle Friendly America program.

“I’m excited to work with the board and staff at Cascade to build on its incredible success and history,” Kiker said. “Outstanding recreational rides and effective advocacy work will continue to be the hallmarks of the organization. We will build collaborations and take advantage of Cascade’s excellent staff, committed board, and dedicated membership to continue to transform the Pacific Northwest into one of the most bicycle-friendly regions in the country.”

Kiker is particularly committed to engaging “interested but concerned” cyclists in the region. While at the League of American Bicyclists, she helped create and raise funding for a strategic plan for the successful launch of the Women Bike program. She hopes to continue similar work at Cascade, with programs that encourage and increase the number of cyclists in the region.

She was critical in building relationships with businesses and foundations while at the League, and helped the organization grow during an important period in its history. Kiker has a strong network of advocates, colleagues and leaders throughout the bicycling world that will be strong assets as she takes the helm at Cascade.

“As bicycling continues to increase in popularity, Cascade’s work continues to increase in importance,” Kiker said. “Helping craft a far-reaching Seattle Bicycle Master Plan, ensuring that bicycle facilities are top-quality and region-wide, and increasing the popularity of cycling in King County and beyond are all on Cascade’s to-do list. I look forward to meeting with our members, partners, and supporters and uniting our community behind a vision for growth through collaboration.”

Kiker is originally from Houston, Texas, where she began cycling to school as a child. As an adult, a colleague convinced her she could ride the 11 miles to work from Washington, D.C., to Tysons Corner, Va., and a cycling advocate was born. After creating a bike club at her office, she went to work at the League of American Bicyclists. She has completed two Cycle Oregon events and a 2006 cross-country tour that began in Seattle. She and her husband, Jason, are parents to three young children, two of whom already love to ride.

Please give her a warm Cascade welcome!

Meet Elizabeth this Thursday at our annual BikePAC event!

Bill Lawrence
Fri. Sep 13, 2013 7:27am
Welcome Eliabeth to Seattle, a bike friendly city with year round cycling (if you have lights, fenders, and do not mind getting a bit damp). I hope you bring enthusiasm and colaition building to your new position as Cascade Bicycle Club's top official. There is lots to be done to build upon an existing strong bicycle communtiy here in the region. Happy Trails, Bill Lawrence (former bike commuter and Seattleite since '76 now living in Grass Valley, CA)

Mary Douglas
Tue. Sep 3, 2013 5:02pm
Congratulations! This is going to be an exciting next few years for bicycling, all around the US, and especially in Seattle.

Vintagengine
Tue. Sep 3, 2013 2:05pm
Sorry I will miss the BikePAC Party. I have worked Elizabeth in the past and know she will do an outstanding job at Cascade.