Mahlum Architects certifies its Seattle and Portland offices through BizCycle

Mahlum Architects, an architecture firm with locations in downtown Seattle as well as Portland, has certified both its worksites through BizCycle. So, who scored better—Seattle or Portland? With similar policies and programming across both offices, the score was close, but Portland’s office beat Seattle by a mere two points, earned on their short-term, visitor bike parking requirements. The final tally? Mahlum Seattle earned 25 out of 50 credits for Silver level and Portland earned 27 for a slightly higher Silver designation. 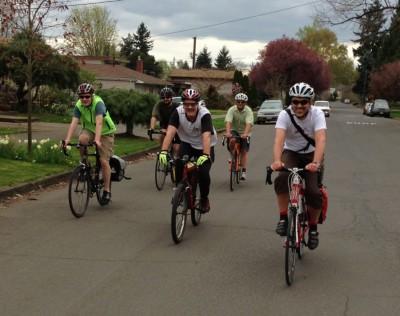 Employees at Mahlum Portland go for a group ride.

Another interesting difference between the two BizCycle workplaces, 23 percent of employees bike to work at Mahlum in Seattle. Commendable, considering Seattle’s city-wide bicycle mode split average is only 3.5 percent. However, in Portland, 48 percent of employees reportedly bike to work. It seems the Rose City has won out once again (Portland’s bicycle mode split is 6.8 percent) .

At both worksites, bike commuters can earn $30 every month for regularly pedaling to work. The Seattle office also put an effort into supporting bicyclists and a safer bicycle network externally by informing employees about the Seattle Bicycle Master Plan Update and encouraging them to provide their own comments. The firm’s participation in the planning process was new territory motivated by the leadership component of BizCycle certification. And the need for safer, more comfortable infrastructure was apparent after surveying staff on their barriers to bicycling. As Jesse Walton, AIA LEED AP at Mahlum Seattle, stated, “Safety is the biggest reason people do not bicycle commute in our offices. Many people do not feel safe riding to work or commuting with kids in tow because our existing bike infrastructure is not interconnected between all neighborhoods and is not designed around all ages.”

Despite the long road forward to all ages and abilities facilities throughout Seattle, Mahlum has had success in growing its bike culture through group rides with staff and by holding bike maintenance and commuting classes during bike month.

Improvements may be coming to Mahlum Seattle motivated by BizCycle. “After analyzing the survey results on barriers to bicycle commuting, the Mahlum Green Team will have a discussion with the principals to decide if installing a shower in our office is possible,” Walton said.

We hope to see those carry through and bicycle commuting continue to grow at both of Mahlum’s offices. Congratulations on BizCycle certification!

Do you work for a bicycle-friendly employer? Apply for BizCycle certification! Applications are due Friday, September 20. Email bizcycle@cascadebicycleclub.org to get started, or visit http://bizcycle.cascade.org to learn more.