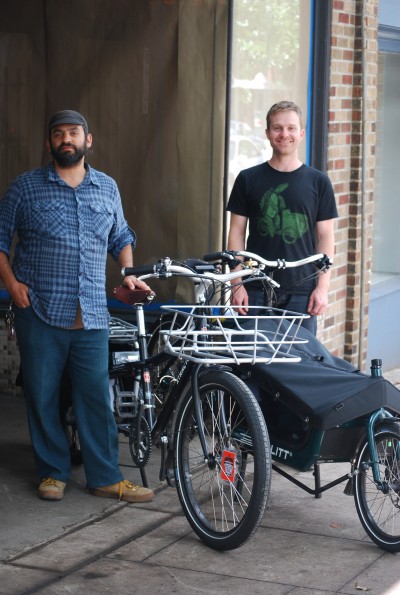 While many people dread the daily grind of dropping the kids off at school, commuting to work and hauling the kids to and from playdates or sport practices, Tyler Gillies and Davey Oil consider it some of the most precious bonding time they get with their kids.

They’re not bothered by the stop-and-go rush hour traffic or by the continuous roadwork and detours on Seattle’s major arterials. Undisturbed even when the gas prices listed at the nearby gas station are yet again higher than the day before. The reason? Their kid-transporting, grocery-hauling vehicles of choice are bicycles.

“My bikes take me and my daughter everywhere I need to go, it gives me joy, it’s fun to talk about and it keeps me healthy. It’s such a blessing,” said Davey. “It gives me time with my kids every time we go to school or a friend’s house.”

Inspired to help families become less car-dependent and to share the fun of bicycling with children, Davey and Tyler are opening G & O Family Cyclery this summer, a bike shop that specializes in cargo and family bikes.

“There isn’t any shop in Seattle that specializes in the products that we’ll carry. In fact, there are only a few shops like this in the country,” said Davey.

Located along the vibrant Greenwood Avenue, Tyler and Davey said they couldn’t be happier to be joining the Greenwood neighborhood.

“We’re located in a neighborhood with a need of a shop but with a lot of cyclists,” said Davey. “And while our specialty is cargo and utility bikes, we are ready and excited to fix any bike that comes in the door.”

A self-proclaimed ‘bike nerd’ Davey has been riding his whole life. Originally from Long Island, he never learned how to drive and is inspired to help people become less car-dependent.

Until recently, Davey worked as a mechanic, bike repair instructor, volunteer coordinator and cycling advocate at Bike Works. He is also a founding member of the Bikery Collective and spent a few years working as a Cascade Bicycle Club Ambassador, doing part-time outreach work as well as teaching classes.  In fact, if it’s a Seattle-based organization or movement involving bikes, Davey has probably been part of it somehow, with his best friend Tyler not far behind.

“I grew up riding BMX bikes but I hadn’t had a bike since I was a kid. When I got to Seattle in 2001, I got a Schwinn,” Tyler said. “If you were riding in those days, the number of commuters was small and if you commuted, you knew everyone. [Davey and I] were shop rats at 20/20 Cycles. They gave us access to work stands and tools and we would come up with creative solutions to bike repairs.”

Since then, they’ve supported each other in their work and life.

“Davey and I both had our first kids within a year of each other,” said Tyler. “And we both knew we wanted to bike with our kids.”

So they started tinkering with putting kid seats on bikes, trying cargo bikes, seeing what’s possible, how to get around.

“We are constantly learning about these bikes and improving options,” said Tyler. But what they found was that it’s absolutely doable to live a car-free lifestyle with kids.

“We’ve been riding with our kids for over three years now and it’s been magical,” said Davey. “There’s so much value in the bonding time we get with our kids.”

With more cargo bikes and family-biking products on the market than ever before, technology has been improving to make family-biking easier, fun and more accessible.

“Good ideas shouldn’t serve only those who are already biking,” said Davey. “I want to give everyone access to experience the awesome fun of biking with kids. It’s so special to have that time together.”

To give people the chance to see a range of bikes, technology and options, G & O Cyclery will have ten bikes on the floor and experience with each and every one of those bikes.

“There is not a bike on the floor that we haven’t ridden and aren’t passionate about,” said Tyler.

They’ll be carrying bikes ranging from $800 to $6,000 as well as child seats and other accessories.

“Family cycling does not require a cargo bike” Tyler emphasized. “We want to be the place to help folks get around with their kids – from using their existing bikes to high-end specialty bikes.

For Davey, the passion for cargo bikes comes from their utility – one bike to do it all.

“I wasn’t interested in new bikes at all until I got interested in cargo bikes,” Davey admitted. “But I want a bike I can ride everyday regardless of what comes up that day – from picking up my kids and groceries to going up a hill for a meeting. Most cargo bikes [today] fit exactly that lifestyle.”

With Davey’s long-time commitment to making bicycling a more accessible and viable option for everyone, G & O Cyclery is as much about serving a niche market with specific products as it is about bicycle education and advocacy.

“I spend hours answering people’s questions and concerns,” said Davey. “Bikes are part of a world-saving solution and people are interested. There are more people riding now, the streets are getting safe –not fast enough and not in all of Seattle – but it’s getting better and we’ll be working hard to make sure it does,” said Davey.

“Bicycling is sustainable and practical,” added Tyler. “I don’t have to look for parking or sit in traffic. I think we’re at a critical time now when cargo bikes are looking more and more appealing. Traffic is only going to get worse. We want to expose people to these ideas, and show that the transition to less car use is a positive and fun thing.”

That doesn’t mean that they’re not nervous about opening a start-up.

“This is coming out of our own pockets, running on passion. Are we nervous? Extremely,” admitted Davey. “But I do believe it’s a good time to open and I really believe in this model, these bikes and this lifestyle. I get nervous until I ride my bike and people ask me questions everywhere I go.”

Tyler and Davey are planning to host events and classes to address the hurdles that keep people from biking, while at the same time, fix any flat tire or broken spoke that comes through the door.

Bikenomics is a feature series to spotlight the greater Seattle area’s growing bike businesses. Know a business that should be featured? Send me an email at amrook@cascadebicycleclub.org.

Grandpa Scheer
Sat. Aug 17, 2013 8:31am
Read every word &amp; totally agree. In the 1980s, I was still riding my Schwinn, the one i got in 1964 when I gave up my paper route (4-years, heavier bike w/canvas saddle bags) w/3-speed Sturmey-Archer shifter &amp; double wire baskets for shopping &amp; kid time. When Gabriel &amp; Tianna were able to move themselves on 20" bikes, Eli was on the back of mine, sitting on a carpet scrap with his feet in the baskets &amp; one of my old belts holding him on the baskets. 16-mile bike hikes, nut gathering, book finding, adventures together! Great family memories for all of us!