Getting across Seattle on a bike should be easy, safe and comfortable, whether you’re an eight-year-old kid or an 80-year-old grandparent.

In June, the Seattle Department of Transportation (SDOT) held a final round of Seattle Bike Master Plan Open Houses to give the public a chance to look at and comment on the almost-complete draft plan, of proposed bike infrastructure and programs. 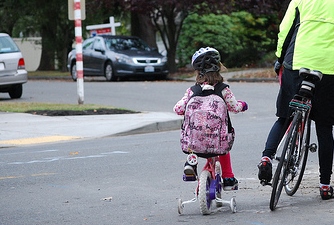 The Bicycle Master Plan (BMP) is a shared vision for how we can make our neighborhoods safer and more comfortable for people who want to ride a bike. The 2013 update of the 2007 Bike Plan goes a long way towards realizing that compelling vision by incorporating new designs, such as neighborhood greenways and protected, separated bikeways that create low-stress connections for the 60% of Seattleites who want to bike more often.

Twenty years ago, Seattle was among America’s leaders in cycling. But as our 2012 Bicycle Report Card noted, we have been losing ground to Chicago, San Francisco, Portland and New York City in recent years, as those cities have been setting big goals for bicycle mode share, building more protected infrastructure and attracting more riders. While the update makes major improvements over the 2007 plan, we believe the plan should strive to make Seattle the most bikable city in the nation.

Cascade wants to see clear goals in the Seattle plan update -- such as a 10 percent bicycle mode share by 2020 and 30 percent share by 2035. The plan needs to increase safety, with a “Target Zero” goal of eliminating bike fatalities and serious injuries by 2030, and it needs to commit the city to building multiple direct, comfortable east/west and north/south cross-city connections. To reach these goals we need an effective implementation plan that prioritizes routes with high-ridership potential.

If we get the Bicycle Master Plan right, and implement it, Seattle will once again be America’s leader in bicycling and more of our kids and grandparents will feel safer on the city streets.

The current June 2013 draft is a step in the right direction, but it can be better by incorporating the following five points. Comments on the plan are due July 26. We urge you to ask SDOT and the Council to ensure Seattle takes five big steps:

- Include protected bicycle lanes, instead painted lanes next to speeding traffic, on streets with more than 10,000 cars a day
- Base the standard level of protection on actual speeds of most traffic, which is the 85th percentile speed, not the posted speed limit.

- Provide protected bicycle lanes on 23rd Ave between E. Union St. and S. Jackson St with an eventual goal of a comfortable, separated connection from Rainier Valley to the University of Washington.
- Provide an interim, buffered bikeway between the University District and Wallingford until the proposed 47th St. overpass is built.
- Evaluate the feasibility of “catalyst” projects that make critical connections to ensure that the overall network function is not impaired by projects that may not be built for some time.
- Develop interim connections to serve people traveling by bike until catalyst connections can be built. 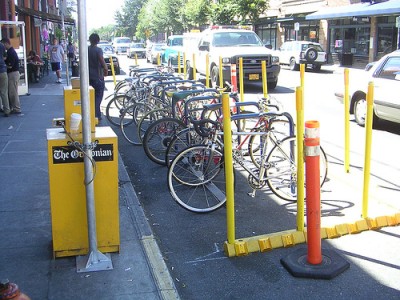 bike racks outside a Portland business

Seattle’s bike parking is notably deficient, and one of the glaring places the city has fallen behind its 2007 Bike Master Plan goals. Yet having quality end-of-trip amenities often makes the difference in choosing whether to drive or bike. The plan should:

The citywide network needs to work for residents of all neighborhoods. The plan should:

- Ensure no parts of the city are lacking protected bicycle facilities or neighborhood greenways by 2020 (as opposed to 2030 as the draft suggests). We should not have to wait a generation for it to be safe to bike in all areas of the city.

5.          Kickstart making our city safer with a clear implementation plan

The city should move quickly to complete high-impact projects that feel safe for inexperienced families who want to bike. The Plan should include implementation plans to:

Seattleites overwhelmingly support making our city safer for people to bike. Adopting this plan is a key step in doing so, but it means little unless we fund and build the improvements it describes.

We are working to partner with the neighborhood residents, the city, and city council to improve and adopt this Plan. You can, too.

We have until Friday, July 26, to help the Seattle Department of Transportation (SDOT) improve the draft and fill in any blanks. Tell SDOT what you think today.

SeaTransitBlog
Wed. Jul 17, 2013 8:39am
Five ways to improve the Bike Master Plan for everyone from kids to grandparents http://t.co/w9rtC3qMXy

NACTO4Cities
Wed. Jul 17, 2013 8:58am
#CitiesForCycling RT @SeaTransitBlog Five ways to improve the Bike Master Plan for everyone from kids to grandparents http://t.co/YlfZtgqWCI

miasilver1
Wed. Jul 17, 2013 8:57am
RT @SeaTransitBlog: Five ways to improve the Bike Master Plan for everyone from kids to grandparents http://t.co/w9rtC3qMXy

svrdesign
Wed. Jul 17, 2013 8:46am
RT @SeaTransitBlog: Five ways to improve the Bike Master Plan for everyone from kids to grandparents http://t.co/w9rtC3qMXy

Brock Howell (@...
Sat. Jul 27, 2013 10:26am
Good point Eli. Portland built major bike corridors through each quadrant that connect into downtown first, and then started filling-in each quadrant/neighborhood with more networks of bikeways while also upgrading the main corridors. I think that's essentially where Seattle is now, but we need to focus a little more on upgrading our main corridors in order to create seamless, AAA cross-city connections. But yeah, I'm worried that we'll (A) build too little infrastructure in any given neighborhood to showcase a great bike-friendly neighborhood, and (B) be too focused on building short sections of bikeways rather than thinking about how they need to fit into seamless cross-city connections (e.g., how will Central District greenways connect with Rainier/MLK and 24th Ave cycletracks to connect Rainier Beach to UW &amp; BGT? or, if 65th isn't built, we'll miss a huge opportunity to build a direct East-West connection from Golden Gardens to Green Lake to Magnuson).

Eli B Goldberg
Tue. Jul 16, 2013 10:09pm
First, great POV paper! Just one thought: #4 is challenging. On one hand, you have the need for equity built into the plan. On the other hand, when we talk with planners from cities like Portland and Vancouver BC that have successfully built out AAA-ish networks with relatively high mode share, we hear again and again the need to build a useful, connected network. In the short term, that can require sacrificing building out facilities in every single neighborhood at once. For example, I believe Portland (as you likely know) focused on the southeast, which I believe has about 15% bike mode share. They're now largely focusing on the NE and on their reaaallly eastern neighborhoods in order to build useful, connected networks in each one. They're not, to the best of my knowledge, trying to build out every single neighborhood at the same time. It worries me that Seattle may instead try to scatter bits of Greenways all over the city in order to achieve geographic equity, and fail to create a network that is immediately useful and shows a payoff on investment of a rapid ridership boost .

Chris Coleman
Tue. May 7, 2019 6:05am
I train my kids to ride a bike instead of wanting to ride an uber. But there's always this fear in me. I mean, there should be established laws as well that protects bikers or whatnot. Chris | <a href="https://junkyarddogonline.com/">junkyard davie fl</a>