The large majority of Seattleites believe making our roads safer for everyone, whether they are driving, biking, walking, or taking transit, should be our top transportation priority. 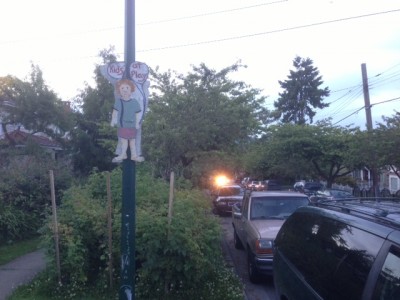 “… Councilmember Bruce Harrell suggested a proposal to expand speed-monitoring cameras at school zones might be discriminatory because the fine for speeding in a school zone is $189—too steep, he suggested, for ‘hardship cases’ who just couldn’t afford to pay the fine.

“That’s a lot of money,” Harrell said. “I looked at the data to look at the people who could not pay, and almost a quarter of them contested [their tickets]. And I don’t know what the factual reason to contest is, but I would imagine most of them are just hardship cases. ... I think we need to be careful of people who are just being careless. And it could be a grandmother taking their grandchild to school or something. So we also have to be sure that we aren’t overreaching.”

[Councilmember Nick Licata noted there is a payment plan for those who find the $189 penalty financially onerous. Details on the traffic camera proposal are on Seattle’s website.]

Harrell’s attitude about speeding is disappointing; it reveals how ingrained speeding is in American culture, and reminds us that traffic crashes are thought of as “accidents” – things that just happen, and we have little control over. Little could be further from the truth.

Harrell’s idea that we shouldn’t hold people who “are just being careless” accountable is disturbing. Their carelessness could kill school children and other people.

Traffic crashes are one of the leading causes of preventable death in America as well as one of the leading causes of years of life lost. Over 30,000 Americans die every year in traffic crashes. America’s cavalier attitude means each year tens of thousands of Americans are killed, and millions are injured, unnecessarily. If we treated traffic safety as seriously as the world’s leading countries, we could save those lives. Mayor McGinn gets it, and has convened several Road Safety Summits and launched a Be Super Safe campaign and a Road Safety Action Plan, which include decreasing speeding.

As Barnett notes, speeding is particularly problematic. It contributes to more fatal crashes than drunk driving, according to the National Highway Transportation Safety Administration’s data. Barnett:

"Speeding is a factor in one in every three collisions in Seattle [and 42 percent of fatal crashes]; a person hit at 30 mph has a 50 percent likelihood of dying, compared to a one-in-ten chance at 20 mph."

Last weekend I was listening to NPR’s Car Talk, hosted by Tom and Ray Magliozzi. One of them (who knows which is which?) mentioned an interesting idea – he never drove through residential neighborhoods in higher than second gear. That, he said, made sure that the car was telling him when he was going too fast. Seems like a great rule of thumb that should make our neighborhoods safer, and remind us not to be careless.

Councilmember Harrell needs to hear from you that our school zones should be safe, the City of Seattle needs to take speeding and careless driving near school children seriously, and speed cameras are part of the solution. E-mail him today at bruce.harrell@seattle.gov.

FASFTS
Mon. Jul 15, 2013 4:08pm
As someone that runs a traffic school, I couldn't agree more. School Zones should be hefty fines with some jail time if need be. The bigger problem is alcohol being a major factor to wreckless driving. Seems like no one can figure out how to lessen these dangers.

Kevin G Carrabine
Fri. Jul 12, 2013 10:05pm
Totally. There is no excuse for speeding in a school zone, and generally speaking no reason to speed in any zone. 'Careless' might = death if you are behind the wheel of a motor vehicle. We all need to be careful, not careless, when we drive.

z7
Sat. Jul 13, 2013 1:16am
On some other podcast (dinner party download), it was mentioned that the most expensive speeding ticket was issued to a Swiss millionaire in an area where fines were proportional to wealth (possibly with some nonlinearity as a floor). Perhaps this gets us best of both worlds?

Steenkin Theenkin
Tue. Jul 16, 2013 10:50pm
There is also a structural problem in creating 'allowances'. Just sit back and watch the entitled take their entitlements. Watch the real folks continue to be singled out for special circumstances en masse. It is not a new game, we're just getting better at it.

No Stress
Mon. Oct 28, 2013 8:07pm
Without a doubt the fines should be high. School zone speeds need to be strictly enforced to keep our children safe.