A brief history of the Share the Road license plates

Conceived by Cascade’s long-time member and volunteer, Don Martin, and designed by Kim Boston of Spokane, the Share the Road license plates are much more than a cool decorative item. 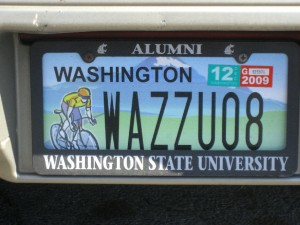 “The Share the Road license plate is the only plate that actually sends a message to drivers of other vehicles about safe behavior on the street. A mini-billboard for better behavior, it lets every vehicle that sports the plate convey the message that Washington bikes—even our cars say so,” explained Barb Chamberlain, executive director of Bicycle Alliance of Washington.

But creating a Washington Share the Road license plate sounds easier than it was.

The initial idea came from Don, who had come across an article celebrating the first Share the Road license plate being approved in Florida.

“Florida! I couldn't believe it! But what a great idea. Just imagine 30 or 40 thousand cars with Share the Road license plates on our highways and the impact they would have on the general public,” recalled Martin. “It would finally show that most bike riders do own cars and do pay highway taxes and could also impact law makers and law enforcement.” Moreover, it would raise awareness.

This was at a time that awareness about cyclists as road user was making headlines as legislators had recently passed the Cooper Jones Act.

Named after a 13-year-old Spokane boy who was killed by a motorist while participating in a local cycling event, the act was meant to provide funding for safety awareness programs.

“The Cooper Jones Act created a body at the Washington Traffic Safety Commission to advance and advocate for bicycle and pedestrian safety,” explained David Jones, father of Cooper Jones. “Some interim funding was provided by grants and short term WTSC funding. As time went on, Lynn Drake at WTSC and others managed to finagle funding from various sources but it became obvious that it was not going to be anyone’s priority as budgets continued to shrink.”

“We all agreed that a "Share the Road" plate for Washington state vehicles could have a significant impact on bicycling safety,” said Martin.

Don began working on a Washington  Share the Road license plate in 2000 with then Director of State Licensing Linda Hendrickson, who was very supportive of the idea.

He also reached out to State Senator, Ken Jacobsen, who had successfully sponsored The Cooper Jones Act.

In January 2002, Senator Jacobsen submitted the Share the Road license plate proposal under Senate Bill, which was supported by hundreds of letters from Washington cyclists.

“Unfortunately, all of our efforts could not convince the Chairwoman of the Senate Transportation Committee, Mary Margaret Haugen, that a special plate should be approved,” said Don.

But Don and his group of advocates weren’t going to give up so easily. They partnered with the Bicycle Alliance of Washington and a widespread effort ensued to collect petition signatures, design a graphic image, enlist the support of local legislators and make this vision a reality.

“Many people in the legislature strongly supported the idea. They were around when the Cooper Jones Act passed and felt that this would be a good solution to the funding problem. They were not happy [that Se. Haugen didn’t want to consider the bill]. Thus, a work-around or compromise was agreed on. Applicants would need to post a bond to cover the cost of adding a new plate. Signatures of those willing to purchase the plate must be submitted in numbers great enough to insure that sufficient numbers of plates would be sold,” recalled Jones. “Don Martin put up the bond money for the STR plates, bless his heart. Signatures by the thousands were collected. [Sen. Haugen] did not think we would sell more than a few hundred plates, not enough to recoup costs, but Don got his money back in about nine months after the plates went on sale. The rest, as they say, is history.”

In 2005 the Legislature decided to allow more "group vanity plates" at an annual $30 fee and the Share the Road submittal was approved.

BAW receives $28 for each plate purchased or renewed to fund bicycle safety and education programs, including Safe Routes to School.

“The extra cost of the plate goes to support bicycle and pedestrian safety education that takes a number of forms, including the curriculum taught in driver’s ed schools and in traffic schools when someone violates a law relating to interactions with bicyclists or pedestrians,” said Chamberlain.

While the process of ordering a specialty plate can feel complex, BAW has established an online “concierge service” to take care of the paperwork and prep it for the vehicle owner’s signature so supporting bike safety with your license plate will be almost as easy as going for a bike ride or signing up for an event (and without the fear of the plates selling out!).