Shutting down TWO lanes of I-5?

Imagine if two lanes of I-5 were shut down. You would face an unprecedented traffic nightmare. 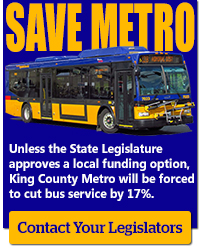 You wouldn’t be able to get to work on time. It would take hours to pick up your kids from school. It would be painful to get just about anywhere.

Now imagine if the only reason these lanes were closed was the Washington State Department of Transportation couldn’t do its job. I don’t know about you, but I would be pretty angry.

This is basically what’s about to happen unless the state legislature grants King County Metro a new long-term funding solution to replace its current temporary stop-gap funding. If the legislature doesn’t act now, Metro will be forced to cut 17 percent of our bus service.

Since 400,000 people ride the bus on an average work day, a 17 percent cut would mean 68,000 people would be forced to drive or simply not be able to get where they need to go. That’s the equivalent of shutting down two lanes of I-5, simply because the legislature couldn’t do its job.

There are two ways you can help save our buses and prevent a traffic nightmare:

1. Contact your state representatives and tell them you support a transportation bill that includes state support and local funding options for transit and safe streets.

2. Attend a Public Hearing of the King County Council and tell them how bus cuts would affect you:

This is about more than preventing a traffic nightmare. It’s about providing people with the basic freedom to get where they need to go.

A 17 percent cut in bus service would be devastating for all of us. It doesn't have to be this way.

Prevent a traffic nightmare, tell your state representatives to save our buses.