Spokane Street Viaduct savings to be used for transportation investments 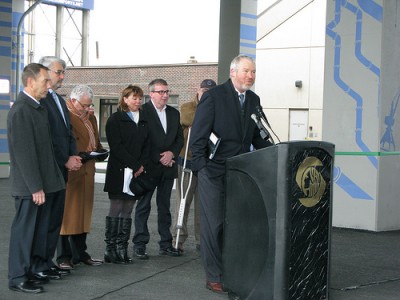 The City recently completed its largest  transportation project in three decades, the Spokane Street Viaduct, and managed to come in under budget.

These cost savings, achieved through favorable bidding climate and strong oversight of the $163 million project, will now be used to invest in various transportation projects, the city announced today.

“We are working hard to capture these savings and spend them on the things that Seattleites care about,” stated McGinn. “That’s why we are using these dollars to support pedestrian safety, invest in basic infrastructure upgrades, road maintenance and planning for the future. I thank our Department of Transportation for their stewardship of taxpayer dollars in their work to bring in Spokane Street under-budget.”

The work that will be funded by these savings include:

The funding for this work is included in Mayor McGinn’s Supplemental Budget proposal to the City Council for the first quarter of 2013.

“By completing the Spokane Street Viaduct project under budget, we are able to fund needed transportation investments elsewhere in Seattle,” said Hahn. “These resources will help make walking, driving and biking easier and safer for everyone.”

James A Hopper
Thu. Nov 26, 2020 11:37pm
Cascade bicycle is a website that has information from the Legislative Scorecard. Must you check <a href="https://www.edugeeksclub.com/blog/Ultimate_Guide_to_Last_Minute_Essay_Writing/">https://www.edugeeksclub.com/blog/Ultimate_Guide_to_Last_Minute_Essay_Writing/</a> and get more education task easily. They have several programs that know every legislator voted on issues that support making it easier. You can also get their details of service that includes a proper working website. Join them for more.