In a press conference today, Mayor Mike McGinn, Councilmember Tom Rasmussen and Seattle Department of Transportation officials announced a series of road safety improvements to streets and intersections in Ballard. They also announced that the City will conduct a full Environmental Impact Statement study for the project to complete the “Missing Link” of the Burke-Gilman Trail in Ballard. 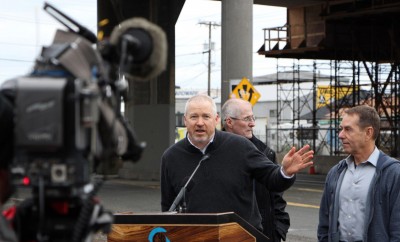 “We are eager to complete the Missing Link, and conducting a full EIS is the best way to break the legal log jam on this project,” said McGinn. “We are also moving ahead on safety improvements on the street that can be implemented quickly to help everyone share the road.”

“For over a decade the City has been working to complete the Burke-Gilman Trail. I am confident that with careful planning both bicyclists and freight and industrial traffic will be able to co-exist successfully in Ballard,” added Rasmussen, chair of the City Council’s Transportation Committee.

The first segment of the Burke-Gilman Trail opened from Gas Works Park in Seattle to Kenmore in 1978. Since then, the City of Seattle has worked to extend the trail westward to Ballard and Golden Gardens. Currently, the trail is not constructed between 11th Avenue NW and the Hiram M. Chittenden Locks, creating a gap between segments of the trail. City records show there were 45 bicycle crashes that were responded to on Northwest 45th Street between 11th Avenue and Shilshole Avenue NW in a four year period (2008-2011). That location, part of the “Missing Link,” is the highest bicycle collision location in the city.

In 2003 the City Council adopted a plan to close this “Missing Link” along the Shilshole alignment. Since then, opponents of the project have gone to court to impede its construction.  Earlier this year the City’s Hearing Examiner  reversed, in part, her previous affirmation of the SEPA Determination of Non-Significance for the Missing Link Project, and remanded it to the Seattle Department of Transportation to prepare an EIS, limited in scope to traffic hazards in the segment of the project along Shilshole Avenue Northwest, between 17th Avenue NW and Vernon.

SDOT has decided to undertake the preparation of a full EIS for the entire project, which the City believes is the most expeditious path to take in the interest of the project. This process will begin in 2013, but will take several more years to reach its conclusion due to the likelihood of further legal appeals over adequacy of any new EIS. A comprehensive EIS is therefore the best approach to expedite the process, by doing the most extensive environmental review, which will be more difficult to challenge legally.

In the meantime there are a number of improvements that need to be made to address safety concerns for bicyclists and pedestrians, as well as vehicular traffic, in the general area where this trail project is proposed. SDOT has prepared specific recommended improvements that will be constructed in 2013 or 2014. These improvements include:

- Striping and signage at NW 48th Street and Ballard Avenue NW to improve vehicular line of sight and slow speeds.

- Shoulder maintenance and replacement along degraded sections of the shoulder along Shilshole Avenue NW.

These improvements are independent from the proposed trail project, and are intended to either enhance public safety or provide routine roadway maintenance. The City will coordinate with, and take input from, bicycle and freight stakeholders in the implementation of these and any additional safety projects.

“The Burke-Gilman Trail is a busy, multi-use trail that provides an important connection to residents and businesses in Ballard. I’m glad to see that the City is moving ahead with its plans to close the Missing Link and with these other safety improvements,” said Davidya Kasperzyk, Founding Board Member of Friends of the Burke-Gilman Trail.

n3rd1ty
Thu. Dec 27, 2012 3:00pm
@cascadebicycle At the moment, I'd be happy with SDOT filling the potholes on the missing link. Requests submitted this morning.