Kat Sweet’s film, If She Can Do It, to premiere this Thursday | Cascade Bicycle Club
Skip to main content

Kat Sweet’s film, If She Can Do It, to premiere this Thursday 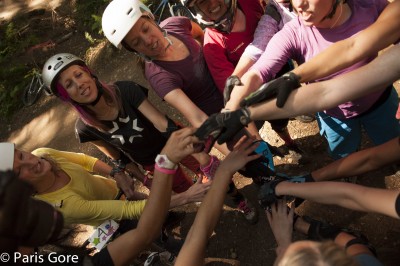 Stop by Saint Andrews Bar and Grill in Seattle’s Greenlake neighborhood on Thursday for the premiere of If She Can Do It, a documentary by filmmaker Mark Brent and Cascade’s very own mountain bike celebrity, Kat Sweet.

If She Can Do It was filmed this past July at the Sugar Showdown, a women’s freeride mountain bike event held at Duthie Hill Park in Issaquah, Wash.

Aimed at providing a venue for professional and amateur female freeriders to compete in a supportive environment while bringing awareness to the ever-growing women’s freeride movement, Sugar Showdown featured a two-day coaching clinic and competition involving 60 women from eight states and two countries.

Backed by Kickstarter funds and community and sponsor support, Brent and his crew of professional videographers were there to document the weekend and the days leading up to the event.

“We got so much good coverage that editing was a daunting task,” said Brent, who also produced the women-focused documentary, Awesomeland, Women Of Dirt. “With over seven hours of footage for a half-hour movie, I was able to distill the Sugar Showdown experience into a compelling story of women inspiring women to push new limits and achieve awesomeness.”

“The significance of this film is enormous for the women of freeride,” said Sweet. “This demographic has been largely overlooked by the bike industry for a long time, and people want to see women riding bikes, supporting and pushing each other but keeping it fun.”

The documentary screening is open to the public, and if you can’t make it down to Saint Andrews Bar and Grill, people all around the world are encouraged to watch the film premiere online at Pinkbike.com.  Both screenings will start at 6 p.m.

Sweet hopes women and men all over the world will watch the online premiere at the same time to build support for what she calls a “sisterhood of shred.”

Kristina Palmer
Fri. Apr 26, 2019 12:55pm
Of course, safety is paramount. I now choose the grill to be as safe as possible, because we will have a barbecue with the children. Usually I choose the best grill for tailgating here <a href="https://bestgrill.reviews/tailgate-grills">https://bestgrill.reviews/tailgate-grills</a> because you can buy a good grill for less than for $ 200. You can also read in detail about the parameters, advantages and disadvantages of each model.