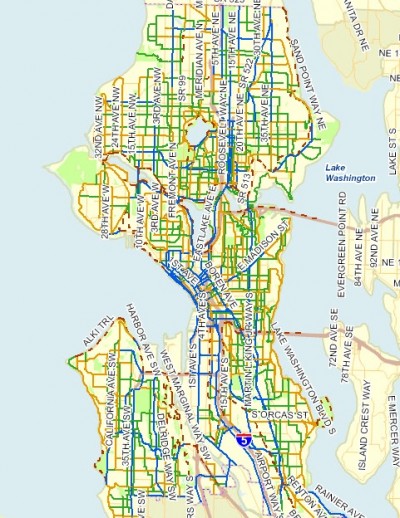 Since its adoption in 2007, the Seattle Bike Master Plan has served as the blueprint for making improvements to Seattle’s bicycle network. And while the BMP has been an effective start to improve the city’s bicycle system over the past five years, an update to the plan is necessary to revisit goals, and to include fast-evolving best practices and new thinking in bicycle infrastructure, safety, and design that will result in an even more connected bicycle network for all Seattle residents wishing to bicycle as a viable form of transportation.

Slated for City Council adoption in early 2013, the BMP update will include updated goals, objectives, and visions.

Planner Kevin O’Neill and his team are currently working on a draft plan, and spent the last few weeks presenting a draft bicycle network map to the community.

With a mission to make “riding a bicycle a comfortable and integral part of daily life in Seattle for people of all ages and abilities”, the updated BMP will include five goals; increase ridership, reducing collisions, and enhance connectivity, equity, and livability. 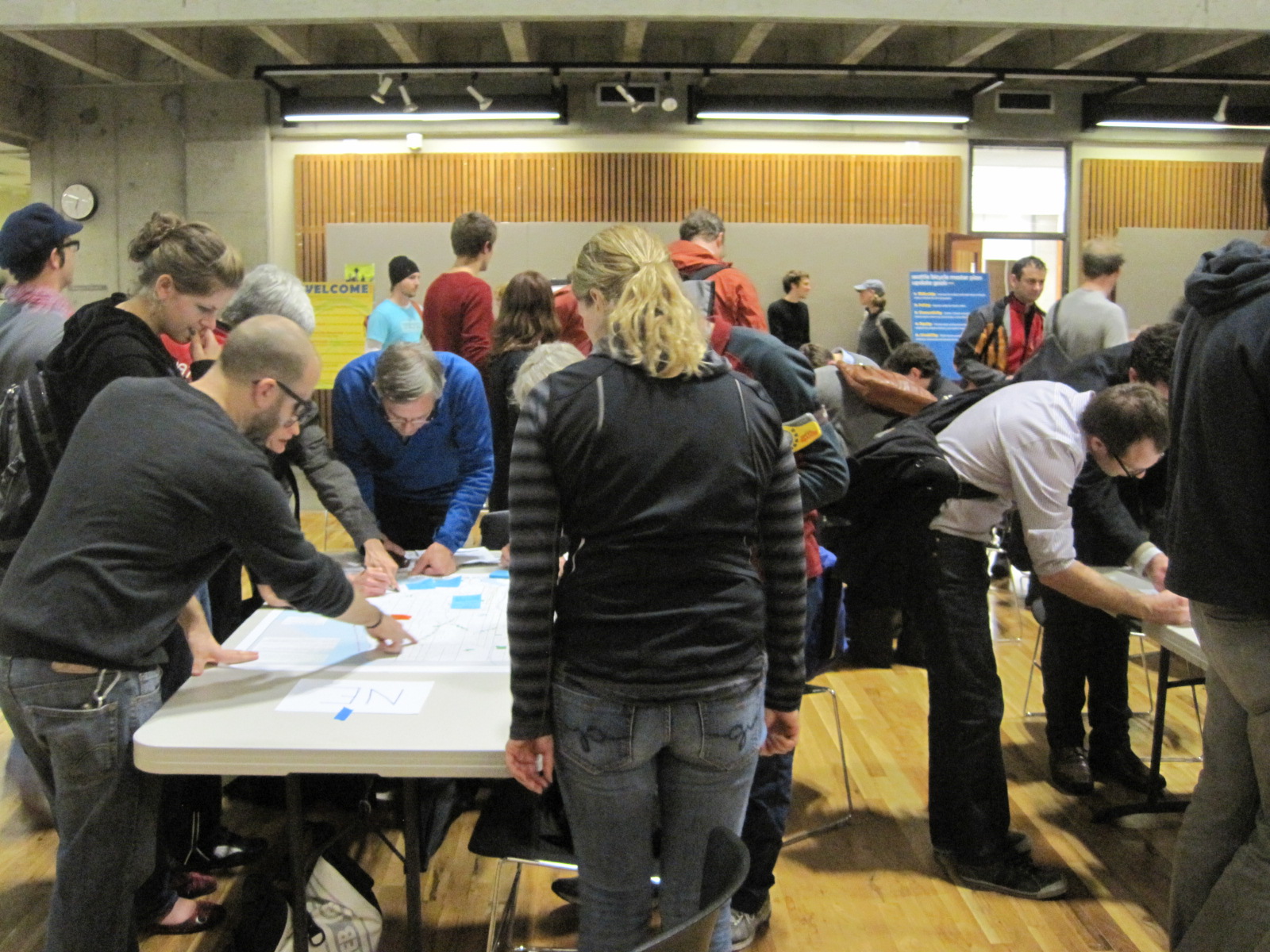 Recognizing perhaps that Seattle is being outpaced by other cities in terms of developing and maintaining a safe, connected bicycle network for riders of all ages and abilities, the draft objectives of the BMP update call for a “high-quality bicycle network” with “outstanding leading-edge bicycle facilities”, including on-street protected bikeways.

The proposed citywide Bicycle Network Map, as presented at the Open Houses, shows an ambitious goal of 500 new or upgraded bicycle infrastructure, including many miles of cycle tracks and neighborhood greenways.

“Due to a very active greenways movement, the Update will bring many greenways to Seattle,” said O’Neill.

The Open Houses provided an opportunity for the community to take a look at the draft map of recommended bike infrastructure and give feedback.

“I am pleasantly surprised by the bigger steps SDOT is taking like cycle tracks and clear, connected routes,” said Heather, age 24, at the UW Open House on Tuesday, Nov. 13.  Heather most common route is from Wallingford to the U-District and to Capitol Hill.

Heather said her preferred bicycle infrastructure are the buffered bike lanes. “Like Dexter. It has a nice width of the bike lane with additional markings between me and traffic. I’d like to see more of that,” she said.

“I like [the proposed map],” added Mike, age 30. “We need more routes that are safer to new riders. In-street bike lanes just aren’t safe enough. Separated bike lanes are crucial to get everyone, young and old, biking. For many biking is out of reach for them because of safety.”

So now is the time to make sure Seattle’s Bicycle Master Plan Update provides a network of safe and connected  streets for everyone, from an eight-year-old child to her eighty-year-old grandmother, so that they have the freedom to ride a bike where they need and want to go.

Using SDOT’s Online interactive map, you can show them where you would like to see bicycle facilities added or removed.

This is a remarkable opportunity to help shape the future of bicycling in Seattle, so please speak up for safe and connected streets in your neighborhood. Comment period ends Monday, Dec. 17

chrismealy
Wed. Nov 21, 2012 11:28am
@cascadebicycle do you know if the city has a text form somewhere for comments on the BMP? that map is a kind of hard to use.