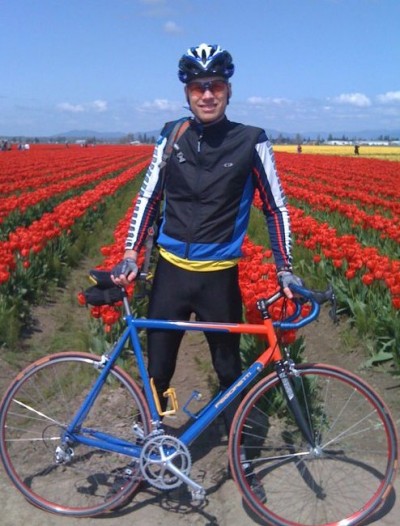 John Padgett and his bike, "The Italian Job"

John Padgett’s earliest biking memory is of going into the garage to get his dad’s tools to take the training wheels off his bike himself. He later remembers terrorizing the neighborhood on a green bicycle that was styled after a motocross motorcycle.

“I’m surprised I turned out as well as I did,” he joked, as we rode along the Ship Canal on the Burke-Gilman Trail one sunny afternoon.

For a large part, the Boy Scouts are to thank for his outcome and his lifelong dedication to community service. Padgett joined the Boy Scouts of America when he was 11 years old, and the Scouts also got him into biking.

“I was probably 12 or 13 years old when I started on the bicycling merit badge and became more serious about my riding,” Padgett said, explaining that to earn the bicycling merit badge, he had to learn how to fix a flat, use appropriate hand signals, oil a chain, ride five 25-mile rides, and complete one 50-mile bike ride during which he had to showcase all the skills he had learned. “All these things sort of culminated into me getting involved in cycling, and I have been doing it ever since,” said the Eagle Scout.

Padgett went on to do some bike racing in college, tour the Canadian Rockies by bike, and participate in many recreational riding events. He even went on a bike-touring honeymoon with his wife, Rebekah.

When he moved to Seattle 15 years ago, he almost immediately got involved with Cascade Bicycle Club. What started with participation in events such as the Seattle to Portland Bicycle Classic and occasional volunteering, soon led to a 10-year-term on Cascade’s Education Advisory Committee.

“The involvement came in a couple of ways,” Padgett recalled. “I was trying to get a little more serious about my riding and participated in some of the events. Professionally, I was working for the Boy Scouts and for one event someone had borrowed the Cascade rodeo kit. I wound up having to return it and at the office I started talking to Julie.”

Julie Salathé, Cascade’s education director, informed Padgett about the Club’s education programs and touched on one of his biggest interests–bike helmets.

A bike racer in college, Padgett had hit his head on a curb during a race one day and woke up in the emergency room. “All I saw for a bit were stars and I thought, [helmets are] a pretty good deal,” Padgett said. “I learned that Cascade did low-cost helmet sales and put helmets on kids at Seattle Children’s Hospital and such. Julie sort of roped me in with that.”

Looking back on his time with Cascade, Padgett said a few highlights stand out.

“What’s interesting is that riding around here 15 years ago, you’d see maybe 5 to 10 percent of people wearing helmets. The biggest highlight for me is being able to just go out on a ride today and seeing a helmet on probably 98 percent of the people’s heads,” he said. “I’d like to think that some of it is because of the promotion that we have done.”

Another highlight for Padgett was getting the Basics of Bicycling off the ground. The Group Health Basics of Bicycling is an elementary school physical education curriculum for third to fifth-grade students in the Seattle, Lake Washington, Highline and Edmonds school districts. The goal of the programs is to teach kids to bike while also teaching them about safety and the rules of the road.

“There was no program in place when I started at Cascade,” said Padgett. “The idea floated around in meetings, we did some research, got the money from Group Health, and started on the curriculum. Just seeing it come to life is a big highlight.”

After serving on the Cascade Education Advisory Committee for more than a decade, he has decided to move on and focus on some passions that have been sitting on the back burner.

“One of the things that has been a lifelong passion of mine is sailing,” he said. “I joined the Renton Sailing Club, a 501(c)(3) that focuses on education, partners with Renton Parks, and does sailing lesson to promote the sport. I get to go out sailing and sharpen my skills and help other people, too.”

But when he’s not on a sailboat, Padgett will still be pedaling around–be it on his way to work or in the mountains–and maybe he’ll pick up a Cascade volunteer shift or two.

Know a cyclist who deserves some special recognition? Nominate them for cyclist of the month! Send your ideas to Anne-Marjie Rook at amrook@cascadebicycleclub.org.

67Rally
Wed. Sep 12, 2012 9:24am
yikes! How'd that happen? ...sub-30 mph), I planted firmly on my side, impacting my shoulder, hip and my head. All of those points took severe force, obliterating my helmet (and shattering my clavicle, rupturing various shoulder ligaments). Had I not been wearing the helmet (which is required by Cascade for all STP participants), I'd be dead. With all of the wrecks everyday riders encounter, I have no doubts that people are surviving them with little or no head trauma or TBI. As an orthopedic surgeon how many cyclists keep them in business. You'd be astounded at the sheer numbers of riders they fix each week.

67Rally
Wed. Sep 12, 2012 9:18am
I don't quite get the "false sense" comment. When I learned to ride, helmets for cyclists didn't exist. It wasn't until my late teens and early 20s that helmets began to make their way into the market for everyday cyclists. I remember those old, heavy brain buckets and the soft foam "ultra" light rigs that would twist your head 780-degrees as it gripped the pavement on contact. I love the feeling of the breeze through my hair. To ride and have no encumbrances on my head and under my chin would be nice...but not nice enough to forgo the protection. During the 2012 STP, I was the victim of an inexperienced rider's poor judgement in a pace line. I suffered his consequences and went down hard (su

Joseph Singer
Mon. Sep 10, 2012 3:05pm
"The biggest highlight for me is being able to just go out on a ride today and seeing a helmet on probably 98 percent of the people’s heads,” You don't perhaps think that "98%" of those riding are perhaps concerned that SPD is going to write up a fine for $100 for not wearing a helmet do you? Helmets only give the illusion that somehow you're much better protected than someone who is not wearing a helmet. It's strange that in countries such as the Netherlands practically _no one_ wears a helmet and their safety record with injuries and fatalities is much lower than it is in jurisdictions that have mandatory helmet laws.

John and Rebeka...
Tue. Sep 11, 2012 4:52pm
Interesting Comments! Let me just say that in college I rode my bike to the store. As I was cutting across a parking lot I hit a cable that separated the parking lot from the sidewalk. Didn't notice that one! Sure wish I had my helmet on that day. People wouldn't have been calling me "scar-face" for a couple weeks.... I'd encourage everyone who wants a better cycling community to become involved in the advocacy and education programs of the Cascade Bicycle Club. Bicycle helmet sales and encouragement are just one of the many things that are done by the Cascade Volunteers and Staff every day. My hats off to everyone who is involved. I'm honored to be recognized for what I have done.

Adam B Parast
Mon. Sep 10, 2012 9:55pm
I can firmly get behind teaching young and old how to ride safely and responsibly but helmets are not a barometer of how safe cycling is. If anything hemlets are a sign of a unsafe cycling environment.  I would appreciate it if Cascade would stop broadcasting this falsehood. If you're racing or riding on a 5 lane arterial in mixed traffic yeah you should be wearing a helmet, but if I'm riding to the park or grocery store I shouldn't have to wear a helmet to be "safe". As a Cascade member I understand the historical precedence of the pro-helmet position but I think promoting this discussion is counter productive to focusing on real safety improvements. Lets focus on safe cycling habits and infrastructure, not pretend helmets are the end all and be all.

MJ Kelly
Tue. Sep 11, 2012 9:30am
@Adam, I'm pretty sure if you follow what we do, you know that we focus a lot on teaching safe cycling habits and getting infrastructure built. We're honored and grateful that dedicated people like John are willing to set volunteer time aside in their lives to help in all aspects of our work, whether that's leading rides, teaching kids, testifying for projects and funding, writing letters, coordinating events or doing data entry. Please feel free to nominate someone for Cyclist of the Month whom you'd like to see recognized. As a side note, I went over the handlebars on what would have been an otherwise inconsequential ride. Landed hard on my forehead. I was on a quiet street and not riding fast. No cars around. I'm not quite sure what happened, but I'm glad I was wearing a helmet, and so is my family. For me, it's no big deal -- nor is it a statement or an attempt to avoid a fine -- to wear a helmet. Sh*t happens. YMMV.

lamar
Tue. Sep 11, 2012 9:23am
Joseph &amp; Adam: 1. you're comparing apples and oranges; the infrastructure in the Netherlands and Europe is generally light-years ahead of and better than the United States. and, don't bring up the unsupported argument that "people who wear helmets are lulled into an false sense of security and ride less safely - tain't so. 2. bottom line: helmets save lives and more serious head injuries -- mine saved me when i had to make an emergency stop to avoid being "right hooked" and, before i could get my foot down, i did a slow motion "Laugh In" fall to the right; my shoulder impacted the road but my head impacted the elevated curbing; result was one damaged helmet but one intact skull; there's no question in my mind that had i not been wearing a helmet my skull would have been crushed like an egg. 3. i support your decision to not wear a helmet - it's your head - as long as you don't expect me to pay for injuries that you sustain from not wearing one.