"Bike to School Day is our favorite holiday."

Cyclists of the Month: CLINT, LESLIE, BERKELEY AND EMMIE LOPER 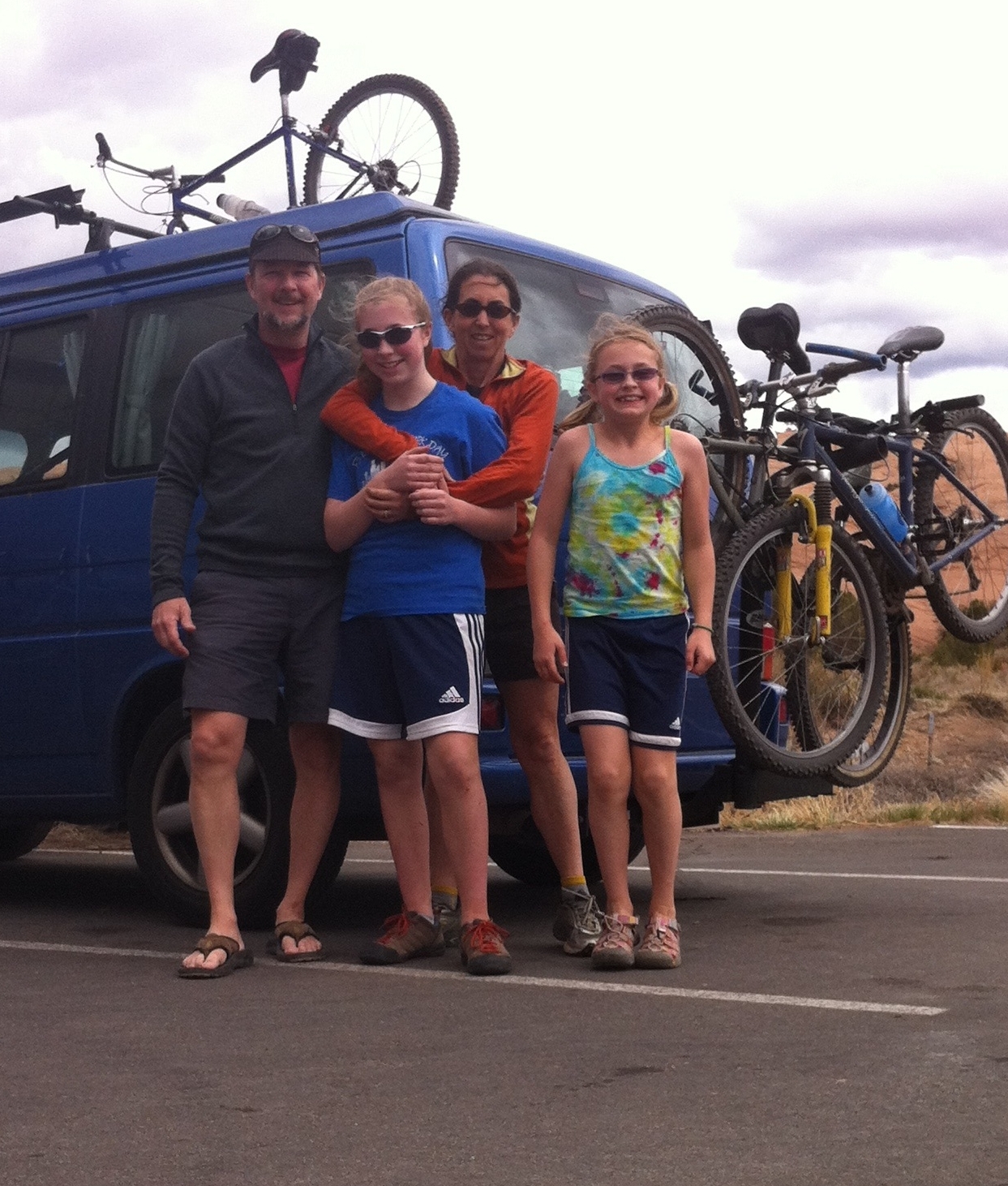 From left to right, Clint, Berkeley, Leslie and Emmie Loper

“Bike to School Day is our favorite holiday,” Clint Loper tells me with a chuckle. “It’s better than Christmas.”

And I believe him. The evidence is everywhere. There’s a bike rack positioned prominently on their front lawn. As we talk, he and his wife, Leslie, pull out bikes and bike paraphernalia – ramps, rumble strips, A-boards – that they use for events at the kids’ schools.

On the day that I meet her, Berkeley Loper, a seventh grader, is wearing a Bike to Work Day t-shirt from 2011.

“When it gets dirty, she puts on her other one. Or she wears it anyway,” Leslie tells me.

Berkeley makes no comment, but disappears into the garage, emerging later with a tandem in tow. Emmie, her little sister, rides in circles around the yard. The Lopers’ crusade started on Berkeley’s first day of kindergarten at Bryant Elementary. The school was less than a mile from their house, so they arrived on foot.

“I remember seeing the line of cars,” Clint tells me. “It was total traffic mayhem. I remember being distraught, thinking, ‘90 percent of these people live within a mile of the school. None of them need to drive.’”

He continues, “I thought, ‘This isn’t the school I want my kids to go to. Living this way doesn’t fit with our broader cultural goals.'”

So he and Leslie set out to change things. They started with their neighbors and friends, organizing people to walk and bike together. Then they volunteered one Friday morning to bring donuts for kids who showed up on bikes, and their efforts grew from there.

“We didn’t know what we were doing,” Clint says. “We winged it for Bike to School Day in 2006. We got people to volunteer to do maintenance and bring treats.”

Six years later, 50 to 60 kids – 10 percent of the student body – park their bikes outside the school on a typical spring day. What’s the key to their success? Energy, enthusiasm and fun. They have grant money, which they spend on prizes and donuts. More importantly, they have the “bike fairy,” their very own Bike to School mascot.

Leslie Loper as the Bike Fairy

The bike fairy has mysterious origins. According to Leslie, it’s the brainchild of Ellen Aagard, a dedicated community volunteer and biking mom who’s on the board of Cascade’s Education Foundation.

“She got the costume somewhere and presented it to me,” she says. Leslie took it from there. “Laurelhurst has a bike fairy, too, but they have rotating fairies,” she tells me. “I’m the steady fairy. One time I had to go away, and you were the Bike Wiz,” she says, with a nod to her husband.

Every Friday during May, Leslie bikes around the border of the school looking for kids on bikes. When she finds them, she taps them with her wand and awards them with prizes.

“I love being the bike fairy,” she says. “This is how we volunteer,” she continues. “We don’t do an auction or anything else. This is just what we do. And we invented it, six years ago.”

So, how’s the school taking it?

“We’ve worn them down,” Clint tells me.

In the early years, parents questioned whether it was safe enough for kids to ride to school, and they had to push the school to put in bike racks. But the kids love it, and no one can argue with that.

Indeed, everyone seems to be coming around. In January, SDOT and the Seattle School District presented Bryant with the First Annual Golden Shoe award in recognition of the school’s success in shifting its students to walking and biking. The school board also integrated walking and biking into its transportation services plan – thanks, in part, to testimony from Clint.

Clint and Leslie have big plans for the coming year. They’re scheduling more “donut days” – on which they meet students at Top Pot before school and ride in together. They’re also reaching out to other schools, including Eckstein Middle School, where Berkeley is a student, and they launched a website to help people at other schools share ideas.

But more than any of their other successes, it’s their daughters that impress me. Berkley has ridden to school every day since first grade. These days, she meets two of her friends at a street corner before school and rides in with them. Emmie, who’s just ten, rides home from Bryant by herself.

“Mom, I’m going to bike Emmie to dance,” Berkeley calls from the captains’ seat of the tandem. As the girls set off on the mile-long trip, their mom tells me, “Sometimes I ask Berkeley if she wants a ride, but she’ll never take it. Emmie will, sometimes.”

“Yeah, she drives to dance, even in the sun,” Berkeley says.
Attachments:

Clint
Sun. May 13, 2012 10:43am
Erica and other Cascade folks -- thanks for the recognition, and for helping spread the word about family and kid biking! I want to make sure to acknowledge the huge team efforts that have gone into every program and project mentioned in the article. Leslie and I have worked in partnership with other parent leaders to develop each of these programs – they should all be Cyclists of the Month too! The new walk.bike.schools collaboration and the blog (http://walkbikeschools.wordpress.com/) that you mentioned is a good example. While I’m a major contributor, our friends at http://carfreedays.com/ are really the creative genius behind the blog, and in fact they have been partners throughout our Bryant and now city-wide bike (and walk) to school work. Many other parents have helped out all along the way too. It really takes a team to implement and sustain these kinds of programs. Thanks again for your support for getting more kids biking to school!

uzair awan
Thu. Feb 11, 2021 9:00am
I really appreciate the kind of topics you post here. Thanks for sharing us a great information that is actually helpful. Good day! <a href="https://lotterysambad.vip/">lottery sambad</a>