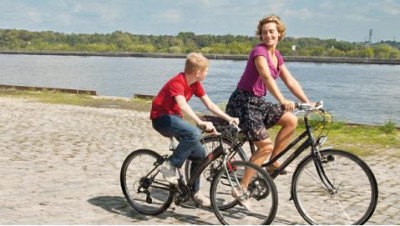 Winner of the Grand Jury Prize at the 2011 Cannes Film Festival, this deeply moving new film by the Dardenne brothers (L'enfant, Rosetta) delves into the emotional life of troubled 11-year-old Cyril (newcomer Thomas Doret), who, abandoned by his father, obsessively tries to find his bicycle- after all, his father must have cared about him enough not to sell that off, he reasons.

Read the New York Times review of the film.

Ride your bike to SIFF Cinema Uptown to see The Kid with a Bike and receive $2 off admission!

For in-person ticket sales only -- just tell the box office you rode your bike to SIFF. Valid for regular, full-priced admission and matinees.

Naomi
Mon. Apr 9, 2012 8:29am
The run of the film Kid with a Bike has been extended until April 20th at SIFF Cinema Uptown!! So you have another week to see this extraordinary film, and to get the discount for bicycling there.

Mark Schwartz
Fri. May 22, 2020 2:42am
The Kid with a bike seems to be an exceptional movie. Its story revolves around a cyclist who loves his cycle and takes care of it. And then he gives this cycle to his son and now I've check <a href="https://www.essayuniverse.net/grademiners-review/">grademiners.com reviews</a> to manage the task. Cinema is offering a special discount for cyclists. Thanks for sharing this post.