Interested in donating a bike? Drop off your gently-used bike at our office, 7400 Sand Point Way NE, between 9 a.m. and 5 p.m. For questions, please email our  Major Taylor Project Assistant at mtpa@cascadebicycleclub.org. 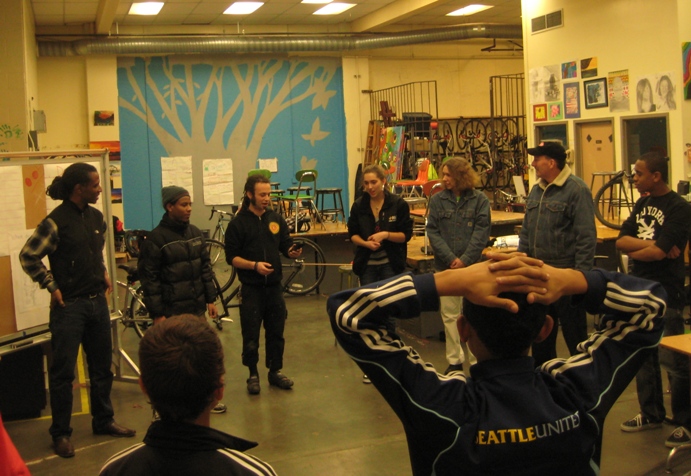 Last Thursday’s Earn-a-Bike session was a significant milestone in the development of the Major Taylor Project. For the first time ever, the celebratory end of the session—where students are awarded locks, lights and helmets and ride their bike home for keeps—was coupled with an invite to all parents, family and friends of the students. We sent letters home and called, letting families know that they were valued as part of the Major Taylor Project and that we would love to meet them. We acknowledged the importance of formalizing relationships with guardians early on in the year, especially if we are going to convince them to let their child ride with us in July on the epic 206 miles of STP.

Around 4 p.m., as students were tweaking final screws, test riding outside, or rummaging through boxes of Cascade swag (leftover event shirts), parents began to arrive, delighted to see what their kids have undertaken the past few 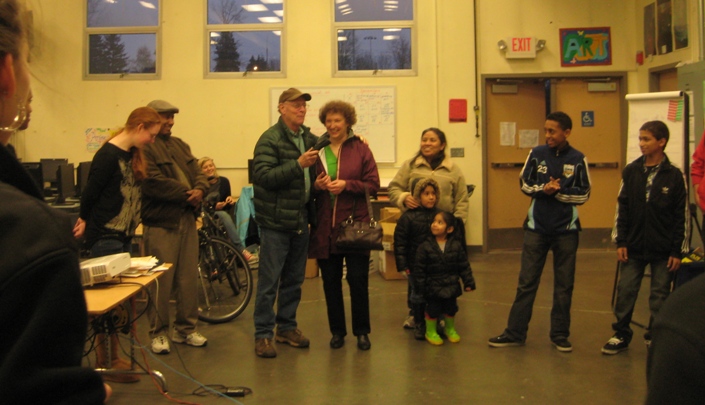 weeks. More than ten parents and siblings came, including a mother whose son couldn’t come because he had to another school commitment.

One mother, who spoke to me confidentially in Spanish, told me how her son was failing some of his classes and that the bike club was the only place her son really excelled. She had asked her boss for the afternoon off, to be present and support her son engaging in what he was most passionate about. I told her how helpful and productive her son was in the club and that Major Taylor Project was considering instituting a grade standard for enrollment in the program. 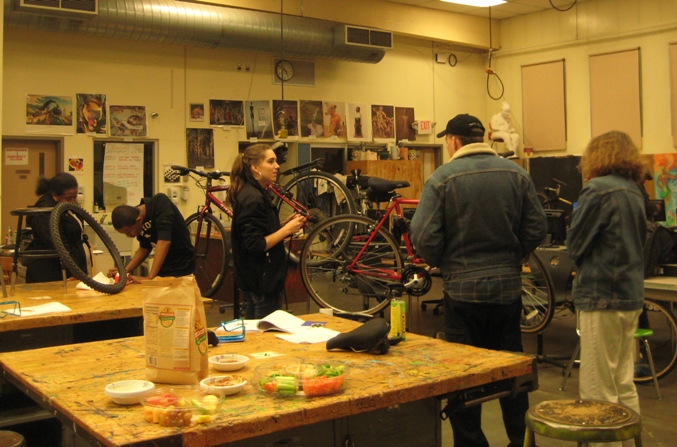 Once all the parents had arrived, we stood around in our customary ice-breaking circle; this time, the parents had to be involved. The theme for the game was to share your name, and not your favorite fruit, but if you were a fruit, what fruit would you be. We tossed around the conventional, "talking" bike tube, as we transformed into artichokes, strawberries and apples.

After the intro game, Serena Lehman and Erica Hann of Cascade led an activity to engage residents in the process of helping SeaTac become a more accessible place for bikers and pedestrians. In order to accommodate for some of the parents who had Limited English Proficiency (LEP), the students led their parents around to the various questions posted on the wall.

This event allowed parents to see what goes on in bike club and the opportunity to offer their support and approval. It provided a space for parents to ask questions like, "how the heck do you get the resources to run a program like that?" The principal of Global Connections, Rick Harwood, a "blackberry," took his time illuminating just how much Major Taylor Project adds to the school. This is a program that the students, the school and staff, and the parents can all get behind.

From Farmlands to Oyster Beds: the 56-Mile Willapa Hills Trail is a Scenic Ride Through Washington’s Coastal Foothills