The group of nine bunched up, geared with new cyclocross tires on Redline bikes, ready for the Woodland Park Cyclecross Race. The air was crisp, but clear. Hundreds of people were shouting. On Sunday, Nov. 13, students in the Major Taylor program and members of Cascade staff (first Cyclocross race ever for yours truly and first race for Ed Ewing in 15 years), rode around the muddy, leaf-covered, race-track with almost 1,000 other riders of all ages. 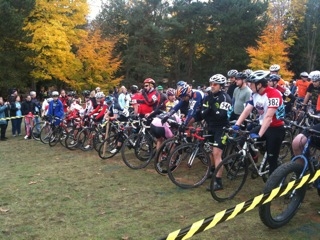 Before the race, the students were firing up on hot cider and warm, homemade cinnamon rolls that Robin Randels brought and served. (Thanks Robin!) For those who had ridden a cyclocross race before, they knew what to expect, and enjoyed showing off how muddy they were after multiple falls. For the newbie riders, they showed up after three rounds a little cleaner; they were riding a little more carefully. 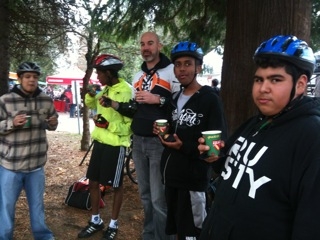 After the race, the group went to Tutta Bella on Stone Way. They played tables games and chatted with each other and staff. An hour later, with nine pizzas consumed and bodies reinvigorated, they loaded up in the 16 passenger van and headed back with new experiences in the biking world. 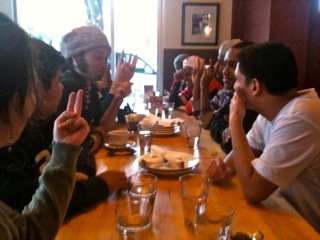 That Sunday in the park would not have been possible without our collective efforts...our Major Taylor community. A big thank you goes to Union Gospel Mission and to AJ Campanelli for safe transportation and guidance. Thank you to Zac and Terry of MFG for donating registration to the group.  Tutta Bella offers an astounding philanthropic deal for non-profits: 50% off your total bill and the tab for nine pizzas came to a whopping $56.00. This student experience could not have happened without your support...thank you!