This article first appeared as the Cyclist of the Month column in the December 2011 issue of the Cascade Courier, our membership newsletter. 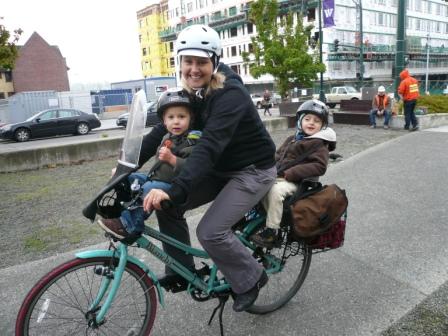 Madi Carlson isn’t afraid of the cold or the rain. And neither is her cargo.

All winter long, Madi rides with her kids – Brandt, who’s four-and-a-half years old, and Rijder, who’s just two – strapped into seats mounted to the front and rear of her Celeste Green Bianchi Milano city bike. The bike was a “push present,” given to her by her husband just before Rijder was born. Brandt’s been riding with her since he was a one-year-old, “strong enough to hold his head up.” With Rijder, she started even earlier, towing him in a Burley trailer when he was just eight weeks.

Impressed? So was I. I wanted to know: Who is this woman, and how does she do it? What motivates her? The notion that she’s saving our planet from excess CO2 emissions? Or that she’s instilling the value of active transportation in her children?

But Madi’s motivations are far from grandiose.

“I’m lazy. And I’m incredibly cheap,” she said. “Coming here in a car, I would’ve had to park four blocks away to avoid paying for parking.”

From her perspective, bicycling simply makes more sense than driving. It’s cheaper and more convenient. It’s maybe a little slower, but, she says, “When it’s your primary form of transportation, you just plan on taking extra time. I don’t go fast. Someone jogging with a tiny dog passed me the other day.”

Though Madi’s no crusader, she’s aware that her presence on the road could help would-be bicyclists make the leap from mini-vans to Bobike mini-seats.

“It’s important for people to see a normal person riding. I mean, I’m pretty normal,” she said. “I don’t wear spandex or anything.”

And it’s true, she doesn’t. She’s remarkably low-key about the entire enterprise. Baskets mounted on the sides of her bike hold extra layers, a cable lock, snacks and even her morning coffee. When it rains, she just dresses the boys in head-to-toe raingear and packs that stuff in giant Ikea bags to keep it dry.

As long as they’re prepared, it’s no hardship.

“We’re all happier on the bike. My kids don’t like the car. They’re always excited to take the ‘mama bike.’”

I spent half an hour riding with them – from the University District to South Lake Union Park – and that much was obvious. The kids are engaged. They’re cheerful. During the short time I was with them, they marveled at a crane (“Is it moving? What do you think?”), a barge, a tow truck and more than one sailboat.

They’ve made discoveries on that bike that they never would’ve made from inside a car. Madi showed me the “secret train tracks” they found peeking out from behind the trees along Westlake Ave. “We’re all about trains. And I’m speaking for all three of us here.”

Family rides with groups like Kidical Mass and Totcycle have helped her make other (dare I say more practical?) discoveries – like Densmore Ave. North, which is a quieter alternative to Stone Way, her previous go-to route from the Burke-Gilman Trail to her Wallingford home. She counts on the support of other family bikers, both online and in person, for information and inspiration.

She doesn’t mention safety, so I bring it up. Does she ever feel vulnerable on the road? She just smiles. “That’s where the sidewalk comes in.”

Madi’s mom was Dutch, and she grew up travelling to Holland. Seeing those slow-pedaling, cycle track-riding Dutchfolk altered her perception. “It wasn’t a scary concept to ride a bike with kids.”

Even so, more separated bike lanes would make a huge difference for them. As we rode the bike lane on North 34th Street on our way to the Fremont Bridge, she mused, “I don’t know why they protect the cars with the bike lane. They should protect the bikes with the cars. Right now, I’m in the door zone.”

Even with the infrastructure, it seems to me that riding with those two kids would be a lot of work. But again, Madi is nonplussed.

“Carrying 70 pounds of kids keeps me warm. I like when people ask if I have a motor,” she adds. “Because I don’t have a motor.”

The kids will soon outgrow their seats on her Bianchi, and she’s in the midst of an upgrade. Her next bike is cargo bike, and it’s in the shop getting painted. She chose pink. “Because who would steal a pink bike?”

She doesn’t say this, but I have to add: Pink bikes are also fun. And Madi Carlson is all about fun.

TypeOne
Sat. Dec 3, 2011 10:42am
Her motivation ("I'm lazy. And incredibly cheap.") reminds me of why my friends and I chose the 1-day STP over the 2-day STP several years ago. We were not ambitious or in great shape, but too lazy to plan for accommodations after day 1 or bundle up supplies and get them to the start line. So we decided to ride through. Never underestimate the laziness or frugality of a cyclist.

Julian
Fri. Dec 2, 2011 11:40am
All hail the cyclist of the month! Don't miss her Family Ride blog for more everyday adventures: http://familyride.wordpress.com/ And currently, I should add, she seems to be enacting bike laws on the twitter: https://twitter.com/familyride

Cascade Members, meet your Board of Director candidate!