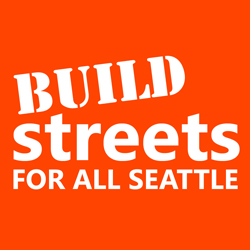 Cascade Bicycle Club is proud to announce our endorsement of Proposition 1, the ballot measure that will create a better transportation future for Seattle.

Cascade played a significant role in the development of Prop. 1. In fact, you could say that Cascade has been working toward this moment for over three decades.

I grew up in Broadview, tucked away in the northwest corner of Seattle. We didn’t have sidewalks in Broadview growing up. Heck, our street wasn’t even paved until my parents got together with our neighbors to form our own one street local improvement district.

As a kid, my bicycle was my ticket to freedom. It allowed me to go visit my friends all over the neighborhood and I could always tell where my friends were hanging out by the pile of bikes in the front yard. But we never rode our bikes outside of the quiet streets of Broadview. It just wasn’t safe.

It was more than my bicycle, however, that gave my friends and me the opportunity to explore our city. We used to take the bus to Southeast Seattle to visit our friends from school and to Northgate to try to meet girls (we normally failed). Taking the bus from one corner of the city to the other took nearly half the day, which didn’t leave us with much time to hang out.

Five years ago my wife Stacy and I moved back to Seattle so that we could start a family, and I could attend the Evans School of Public Affairs and learn how to create a better future. Returning to my childhood home three decades later, Broadview still has no sidewalks, it’s still not safe for kids to ride their bikes around Seattle, and it still takes half the day to take the bus from one corner of our city to the other.

Yes, we’ve made a lot of progress as a city. We adopted a Bicycle Master Plan and have taken significant steps forward in building out our bicycle infrastructure. We built a light rail line and have plans to dramatically expand the network. We adopted one of the most progressive Pedestrian Master Plans in the country (and then forgot to fund it). But at the end of the day, Seattle still has a long way to go to become the type of city we know it should be.

Stacy and I learned this first hand. We lucked into a place three blocks up the hill from the Locks in Ballard. The 44 ran two blocks from our front door to half a block from the Evans School. But when I took the bus to and from class, it kept taking me an hour to go five miles. So I decided to try riding my bike. Despite one large missing link, I could take the Burke-Gilman directly across town to school in under half an hour. The second day I was riding to class I got hit by a car. I was fine. Both the driver and I made mistakes that resulted in the incident. It was a giant wake up call.

Stacy wasn’t so lucky. She landed a job just up the hill from Gasworks, almost directly on the Burke. She’s not really a cyclist, but given that there’s not a good way to take the bus from our home to her work and $4 a gallon gas makes driving incredibly expensive, she decided to give riding a try. On her first attempt she got run off the road. That’s the last time Stacy ever rode her bike in Seattle.

But for me, bicycling was the only way I could get around. We could only afford one car so riding my bike was simply the fastest (and often only) way for me to get to work or school. After both Stacy and my incidents, I sought out and received an appointment to Seattle’s Bicycle Advisory Board because I wanted to help make our streets safer for bicyclists. There I had an incredible opportunity to work with passionate volunteers learning the ins and outs of bicycling in Seattle. The most important thing I learned was that we need a lot more money for bicycling facilities (a whole lot more) if we want to get serious about making bicycling a realistic option for people like Stacy who want to ride, but just aren’t safe.

Even though it seems everyone in Seattle talks about how we should be a city where everyone has the freedom to safely walk, bike, drive, or take transit to get where they need to go, for whatever reason, we aren’t aligning our infrastructure investments with this vision. We’re not spending our money in a manner which will create the future we want to live in.

This is exactly why I was proud to join with the Cascade Bicycle Club in launching the Streets For All Seattle campaign last year. We believed that the time had arrived for our city to get serious about funding the pedestrian, bicycle and transit infrastructure that our citizens demand and build a transportation system that will make Seattle work for our future.

We built a coalition of over 60 community, labor, business, political, transportation and environmental organizations who shared our vision of Seattle being a city where everyone has the freedom to safely walk, bike, drive, or take transit to get where they need to go. We set out to engage the entire city in a conversation about how we can build a better transportation future and give our elected officials the support they need to do the right thing.

We made things happen. We pushed the Seattle City Council to create a Transportation Benefit District to fund pedestrian and bicycle improvements and support basic street maintenance, and to form the Citizens Transportation Advisory Committee III (CTAC III), asking them to undertake a full review of the city’s transportation funding system and evaluate the potential for a ballot measure asking Seattle voters to fund additional transportation projects.

CTAC III performed a comprehensive review of how Seattle can fund and build a transportation system that will work for the future. When they reached out to and listened to the people of Seattle they heard some common themes: We want more walkable streets, family-friendly bicycle infrastructure, faster, more reliable buses, and streets that aren’t littered with potholes. More importantly, we expressed a willingness to pay for these investments because they would help us become the city we know we should be. Cascade had a seat at the CTAC III table and learned a ton through this conversation.

After crunching the numbers, reviewing the plans, and listening to the people, CTAC III asked the City Council to give Seattle voters the opportunity to vote yes on a package that would raise considerable funds for walking, biking and transit infrastructure, along with significant money to fix and maintain Seattle streets.

The City Council did their jobs, tweaking and refining CTAC III’s recommendation into Proposition 1, and on Aug. 16, they unanimously voted to send it to the November ballot.

Proposition 1 will give Seattle faster, more reliable transit service; repaired and repaved roads that work better for everyone; and new sidewalks, better crosswalks, and more family-friendly bike infrastructure. Now, we’ve transformed Streets For All Seattle from a coalition working toward a shared vision into the campaign to pass Proposition 1, a package of investments that will help achieve our shared vision.

It was an easy decision for Cascade to endorse Proposition 1. It 1 will generate $14 million for bicycle infrastructure over the next ten years. That’s enough to build twenty miles of neighborhood greenways and forty miles of bike lanes and sharrows. It will dramatically accelerate the implementation of the Bicycle Master Plan (and the Transit and Pedestrian Master plans) and provide the funding necessary for Seattle to start building separated facilities for the thousands of people like Stacy who want to ride, but just aren’t safe. Hopefully, it will help prevent more tragic and unnecessary deaths.

If you’re reading this blog you probably care about creating a better community through bicycling. That’s exactly what Proposition 1 will do. We’ve got let than two months to get this done, please join us and let’s make it happen.

And if you would like to volunteer, please email Cascade Advocacy Campaigns Manager, Max Hepp-Buchanan or give him a call at (206) 226-1040.

Jake Jackson
Fri. Sep 16, 2011 12:06am
Nice try, folks, but that $60 tax increase is going to be crushed. You can't pull the wool over motorists' eyes. You want motorists to pay 100% of the bill and bicyclists nothing, while only 18% of the proceeds would go to fix streets. Good luck. You'll need it.