Get your game face on #GHCC

Ah, May. It's just around the corner, and that means one thing here at the Cascade office: the start of Bike Month and the Group Health Commute Challenge. We loooove the Commute Challenge at our office. Not just because it's our own event, but also because it stokes the embers of competition, which burn hot beneath the surface of many of my colleagues, myself included. 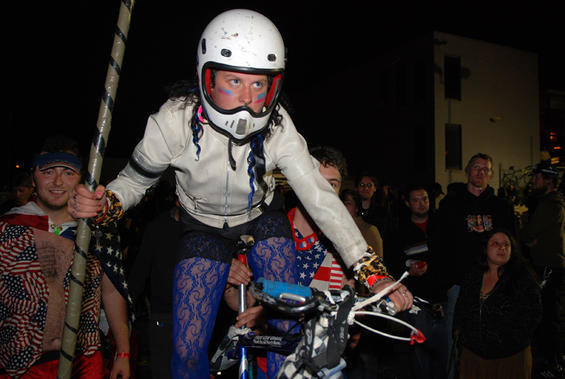 Being a team captain is super fun, especially in a workplace that embraces the contest. If you're toying with the idea of captaining a team, I say "Go for it!" You'll be pleasantly amazed by how much people will rally and ride for bagels, brownies, team shirts and accolades at team meetings. And taunts. Taunts work, too. (Note: if you taunt the other team too aggressively, it will backfire and you will lose.)

This year, Teagan, Tessa and Sander are taking the helm of the three Cascade teams, and they're off to a roaring start. They've concluded the closed-door draft session, announced teams, and laid down a few rules:

It's been brought to our attention that we should cover a few ground rules before sending the teams off and biking.  Please read closely.

I have a feeling May 2011 is going to be one for the record books.

Tom Baldwin
Mon. May 25, 2020 4:15am
This is a very cool competition. I also really love the excitement, but I experience it more in online casinos. I found a wonderful <a href="https://casinotop.co.nz/live/">CasinoTop</a> site where you can find reviews of the best live online casinos. I like to spend my time like that.

Your Seattle to Portland journey making an impact in Spanaway, Wash.