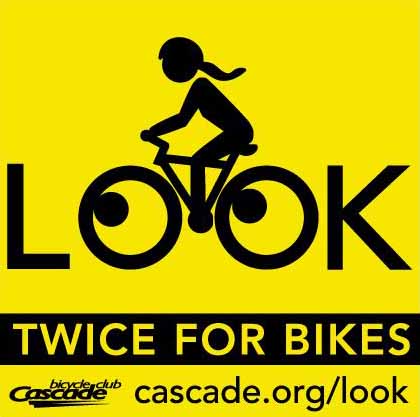 Cascade Bicycle Club launched the "Look Twice for Bikes" campaign in early 2013 to promote looking out for people riding bicycles on roadways. Some of the most common collisions between cars and bikes are preventable by looking out for each other.

By looking out for bikes, you are supporting a livable community where people riding bicycles—your friends and neighbors—can get where they need to go. Your attentive driving practices make our roadways safer, friendlier places.

What can drivers do?

As a driver, you will encouter people riding bicycles on the roads. Look Twice for Bikes when you are...

Depending on how you are parked, your door may swing open into the pathway of traffic. If a person riding a bike is passing by, they could be harmed if the door hits them or causes them to swerve into traffic to avoid hitting your door.

The most common cause of a car-bike collision is when a driver is making a turning movement. There are many different factors grabbing people’s attention as they maneuver through an intersection. Make sure you look twice.

Children often ride bicycles on sidewalks to get around, until they have the skills and knowledge to ride on their neighborhood streets.

When a person riding a bicycle enter a crosswalk at a fast pace, they are at risk of being hit by a driver who isn’t looking for them.

Putting it into practice