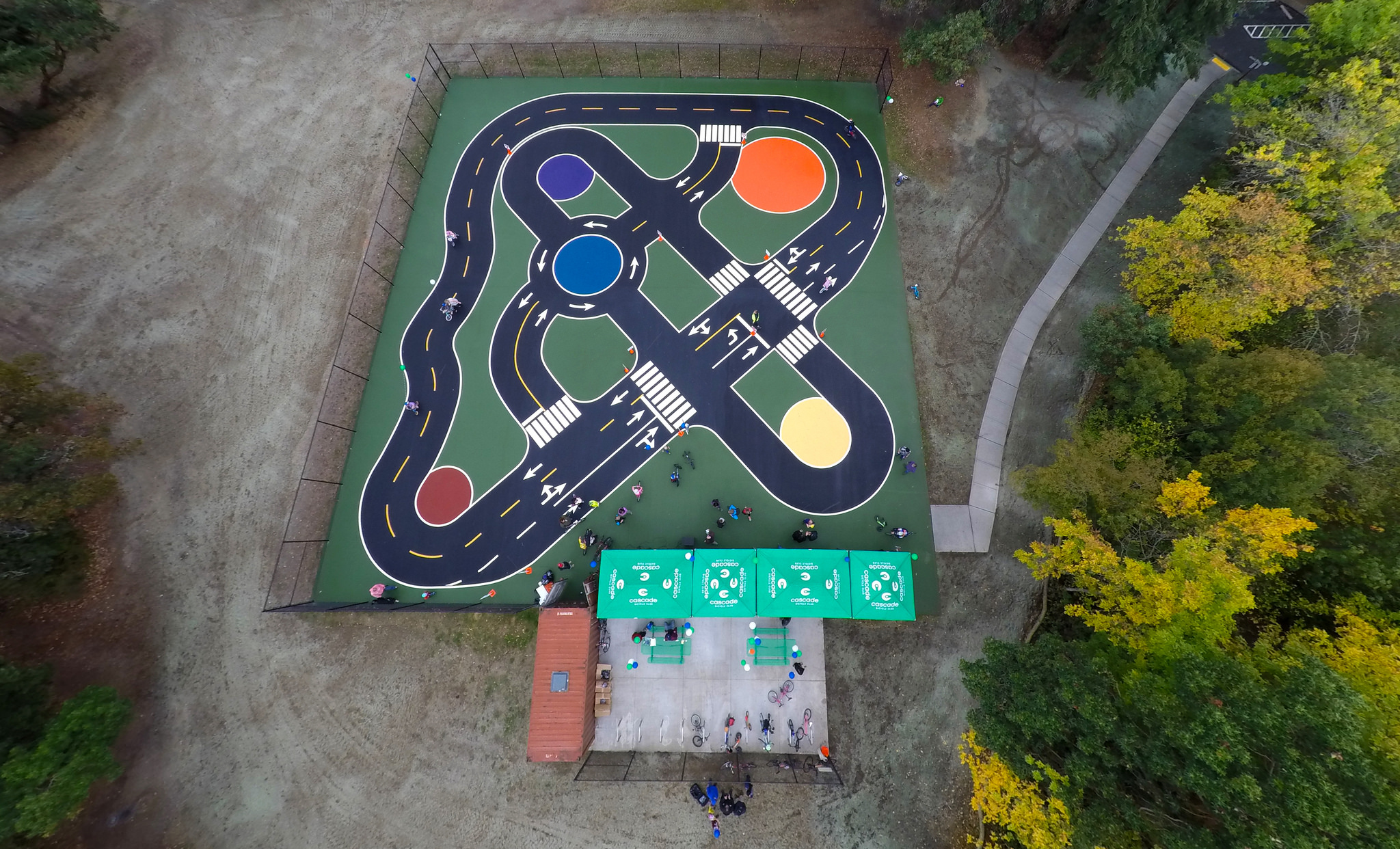 Cascade Bicycle Club and King County Parks teamed up with Alta Planning to build the state’s first bike playground at Dick Thurnau Memorial Park in White Center. The bicycle park and playground has been open since October of 2016 and gives young riders a safe place to learn the joys of bicycling.

Thanks to a partnership with King County Parks and other essential community organizations like the YES! Foundation and the White Center Community Development Association (CDA), the White Center Bike Playground is a reality for kids of all ages and abilities.

The Bike Playground, built by Alta Planning + Design, is a first of its kind in the nation. It features a small-scale streetscape (where the old tennis courts used to be) complete with realistic road markings and obstacles. It teaches cyclists of all ages rules about bicycle, pedestrian and traffic safety in a safe, comfortable setting. Cascade and its partners have made use of the park to offer bicycle camps, community riding events, and more.

The idea to build the White Center Bike Playground was born from a partnership with King County Parks. When word of King County’s Youth Sports Facility Grant program came our way in the spring of 2015, we jumped at the chance to dig deeper in our youth and family-based community programming. In particular, we were inspired by the success of then recently expanded Major Taylor Project (MTP), and wanted to build on the program’s success by making bicycling more accessible throughout the region.

After some initial brainstorming around the Cascade conference table, the concept for a bike playground in White Center was born. King County Parks staff members helped us narrow the field to Dick Thurnau Park, and after receiving a $75,000 grant from the Youth Sports Facility Grant program, plans were quickly underway to renovate the old tennis courts there.

Our White Center partners have been instrumental in guiding us toward the completion of this project. The White Center CDA played a key role in helping us determine community needs and ideas for programming. Similarly, the YES! Foundation helped guide us in how we might expand on our current programs at the new facility. The YES! Foundation is a long-time partner of Cascade’s Major Taylor Project, with many MTP students being actively involved in programming there.

Read about the community engagement process that went into building the park: https://cascade.org/blog/2018/06/using-community-engagement-advance-bicycling-white-center

See a video of the park: https://kingcountyparks.org/2016/10/03/bike-playground-dick-thurnau-memorial-park/