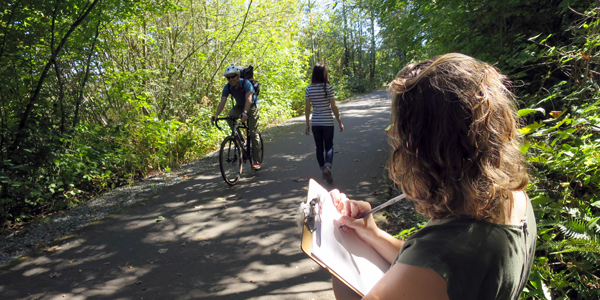 Better bike data helps advocates and jurisdictions increase safety, improve bicycle routes and make the case that traveling by bike is an important way to get around whether for transportation or recreation. Cascade partnered with WSDOT on the Washington Bicycle and Pedestrian Documentation project to coordinate volunteer power and help count people biking, walking, and rolling in specific locations around Washington state.

An update on the Annual Pedestrian and Bicyclist Count

WSDOT has made the decision to suspend its annual volunteer pedestrian and bicyclist count program for the time being in order to further develop the process for collecting count data. We at Cascade extend our thanks to every one of the thousands of volunteers across the state who collected this important data, rain or shine. Some people volunteered once, and many volunteers returned year after year. Your work has been essential in making bikes count!

"WSDOT staff wish to convey our sincerest gratitude to everyone who has contributed to Washington’s pedestrian and bicyclist count efforts. This was a difficult decision given the count-focused partnerships we have forged over the last decade between WSDOT, Cascade Bicycle Club, local agencies, and the many dedicated volunteers who have devoted their time to this program. All those hours counting out in the weather have made a difference in how our state thinks about people who walk, bike and roll. Those efforts spurred investments in permanent counters that are key tools needed for the evolution of our counting program. You have collected both quantitative and qualitative data used in official reports and requests for information. People routinely visit the WSDOT data portal to obtain count information and our goal is to make those resources even stronger.

Your local agencies may still rely on this kind of short-duration count with volunteers and we encourage you to check with them and to participate if you can. For the information needed to develop and implement statewide policy, WSDOT is seeking methods that will support volume estimation work and safety analyses that depend on those estimates. Specifically, robust volume estimates are needed as inputs to safety performance calculations that help WSDOT identify locations of concern before crashes occur. This kind of work is done for motorists already.

The Washington state bicyclist and pedestrian documentation project has so far relied on annual, volunteer counts to get an idea of the numbers of people walking and biking. Unfortunately, the volunteer program is unable to collect data with sufficient frequency and in enough locations to inform the work that needs to be done. It is possible that WSDOT may be able to re-envision volunteer counts in the future, as certain types of data can only be collected that way. We might also seek to supplement the quantitative data from new sources with qualitative information that only humans can collect. For now the decision has been made to focus limited resources toward identifying and testing those new counting methods.

Again, many thanks for your contributions to better walking and rolling in the #1 Bicycle Friendly State.”