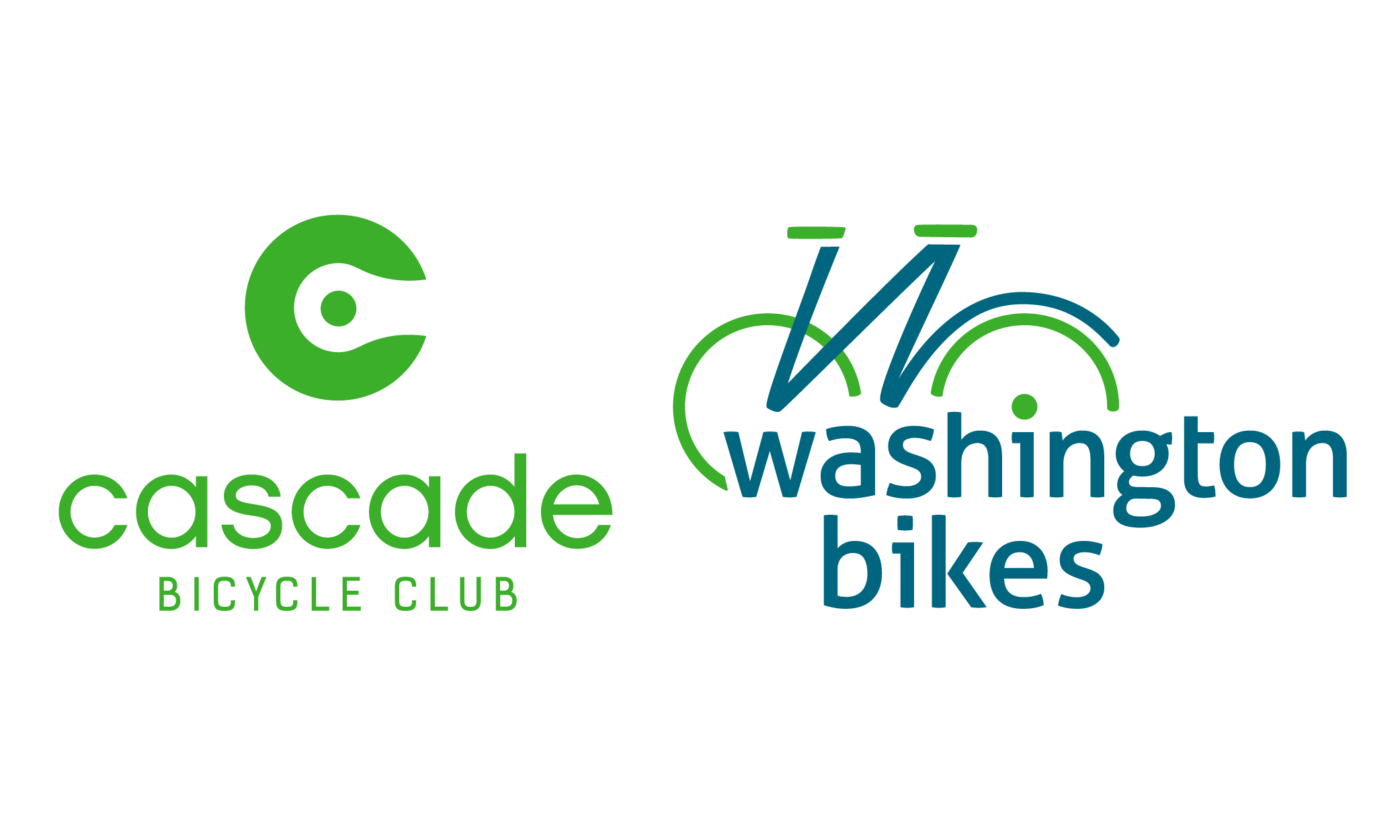 The boards of directors of Washington Bikes and Cascade Bicycle Club approved the merger on Tuesday, Dec. 8, 2015. This merger will enhance both organizations and increase the reach and effectiveness of bike advocacy and education in a state that is already #1 in the U.S. for bicycling.

Cascade Bicycle Club, established in 1970, has built a strong organization on its mission: improving lives through bicycling. By creating exceptional opportunities to ride through signature events, teaching children and adults to ride safely and transforming the Puget Sound region through bicycling, Cascade has grown to become the largest local bike organization in America with more than 17,000 members.

Washington Bikes was founded as the Northwest Bicycle Foundation in 1987 by four members of Cascade Bicycle Club with the mission of growing bicycling statewide. The founders wanted to see effective state advocacy on behalf of all riders and organizations in the state thrive alongside regional Cascade Bicycle Club activities. Since then, both organizations have grown and evolved in ways that make it logical to bring them together under a vision of bicycling for all.

Washington Bikes has built a strong organization delivering state policy wins year after year and helping local advocacy efforts start and expand around the state. Due to Washington Bikes’ work and success, Washington State has been named the #1 Bicycle Friendly State in America eight years in a row and state funding for biking and walking infrastructure has reached historic highs.

Blending the best of both organizations creates an incredible bicycle nonprofit with a statewide mission carried out through a variety of award-winning programs. Both organizations’ strategic plans and programs are highly complementary. Each brings elements the other lacks, and together they can have more reach, effectiveness and efficiency than either alone.

A 501(c)3 can do advocacy but not endorsements, a 501(c)4 can do endorsements but not receive tax-deductible donations. Both have lots more details (click here to learn more from the IRS), but our members spoke and said it was really important that we keep both types of organizations!

The 501(c)4 will continue WA Bikes’ work encouraging bicycling across the state, and STP is a very effective tool for doing that — and a strong and effective funding stream for the 501(c)4.

Leaders of the organizations have been discussing the idea off and on for a while. With Cascade’s process to redefine its 501(c)3 and 501(c)4 roles and activities, with a strong and growing partnership and alignment among leadership of the two organizations, 2015 was the best possible time to formalize the analysis and move to a decision.

When does the merger take effect?

What will the organization be called?

As of Jan. 1, 2016, Cascade Bicycle Club will be the name of the 501(c)3 tax-deductible wing, focused on education, diversity and inclusion programs, most of the signature events, and other advocacy work.

The organization’s 501(c)4 arm, to be called Washington Bikes, will address statewide policy and outreach, selected statewide events and activities, and candidate endorsements.

What happens to the boards of the organizations?

The Cascade board will actively recruit and include board members from regions across the state reflecting the diversity of people who care about better bicycling. The Washington Bikes board will be appointed by the Cascade board.

Washington Bikes and Cascade Bicycle Club expect to use regional networks to supplement board representation, building on established relationships with local advocacy groups, bike clubs and other partners.

What happens to my Cascade Bicycle Club membership?

Your membership will be transferred to the nonprofit 501(c)3, Cascade Bicycle Club. This means your membership dues will now be tax deductible. Nothing else will change.

There are lots of reasons to be a member of Cascade Bicycle Club:

Our members support the work we are doing, and want to improve lives through bicycling.

The bylaws of the 501(c)3 have been rewritten to carry through all of the rights of membership that you had in the 501(c)4.

What happens to my WA Bikes membership?

Members of Washington Bikes as of Dec. 31, 2015, will become members of Cascade Bicycle Club through Dec. 31, 2016. After that they will need to renew membership in Cascade if they wish to belong to a statewide 501(c)3 bike advocacy organization and receive a tax deduction for their support. If they want to give directly to statewide advocacy under the Washington Bikes name they may continue to do so; it will be a donation to a 501(c)4 and as such will not be tax-deductible.

What happens to the staff of the organizations?

All employees at Cascade Bicycle Club will retain their jobs in the merger. Washington Bikes Executive Director Barb Chamberlain will become Chief Strategic Officer and WA Bikes State Policy Director Blake Trask will become the Senior Director of Policy; they will carry these titles for both Cascade Bicycle Club and Washington Bikes. The few members of Washington Bikes small full-time staff who will not be joining the merger have been provided severance packages and will get priority for any appropriate future job openings.

How will the new organizations support local advocacy around the state?

Washington Bikes will serve as the statewide policy voice on behalf of better bicycling and will continue to send out action alerts, coordinate with local groups for policy rides and other activities and amplify voices from local initiatives through its communications.

Additional details on how Cascade will work with local groups will be developed through the strategic planning retreat. Cascade is committed to working with local clubs and advocacy groups around the state.

Will there still be a Washington Bike Summit?

Yes. The Washington Bike Summit statewide bike conference will continue to be held as a forum for advocates and professionals to connect and learn.

What happens to the Share the Road license plate?

Thanks to the efforts of Washington Bikes, the Share the Road license plate was created to support statewide bicycle education and safety programs. These programs will be carried out by Cascade Bicycle Club as a 501(c)3, which is the required nonprofit designation to receive specialty plate revenues.

Who will deliver the WA Bikes Safe Routes to School curriculum?

The proposal was written as a partnership that included Cascade Bicycle Club. The state contract will be carried out as a 501(c)3 activity. Cascade already coordinates the statewide volunteer-based bike count that takes place each fall in cities and towns across Washington.

Will the US Bicycle Route work continue?

Yes. WA Bikes board member John Pope, who led the efforts for identification and designation of USBR10, will continue to play an active role and will serve on the Cascade Bicycle Club board of directors.

Some of the Cascade ride routes serve as an excellent starting point for some of the proposed USBRs. Cascade staff supplemented by volunteers from local bike clubs and Cascade members will continue work to complete the USBRS in Washington State.

What happens with State Scenic Bikeways?

What happens with bike tourism promotion?

Washington Bikes has established partnerships and created content that will be maintained. Bike tourism will become part of the work carried out by staff across the organization in various ways to be worked out as part of the transition and future strategic plans. Cascade rides provide an economic boost to the towns through which the rides pass, and the large numbers of riders who have registered for Cascade events represent a growing audience for information on other types of bike travel.

Washington Bikes manages the King County Metro bike lockers. Who do I contact about those now?

Continue to contact Washington Bikes for now at 206-224-9252 ext 306. Details for future program delivery as a 501(c)3 activity will be worked out as part of the transition planning.

Washington Bikes distributes city of Seattle bike maps. Who do I contact about those now?

Continue to contact Washington Bikes for now at 206-224-9252 ext 306. Details for future program delivery as a 501(c)3 activity will be worked out as part of the transition planning.

What happens to the Washington Bikes store in Pioneer Square?

The store will close before the end of December 2015.